This Sleek Personal Submarine Is a Supercar for the Sea 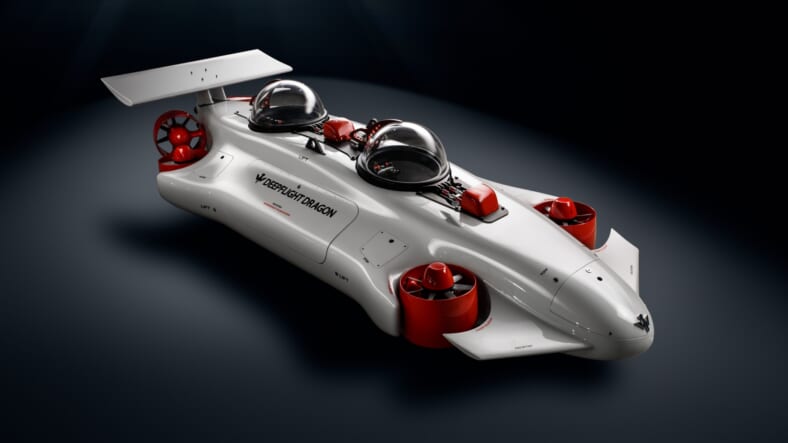 Your flying dreams may have been in the sky, but the Deepflight Dragon two-seat personal submarine will let you fly through the sea. The Dragon is the latest underwater sports car from the company that produced the Super Falcon a few years ago.

This $1.5 million submarine may look like a spy movie fantasy, but it is a very real machine, featuring six 1.2-kilowatt thrusters powered by a 15 kilowatt-hour pack of lithium ion phosphate batteries.

The twin bubble canopies give each occupant a great view out, while the on-board pressurization system keeps them dry and supplied with oxygen. The ability to dive to 400 feet puts the Dragon ahead of U.S. World War II-era military submarines, which were rated to 300 feet.

Those vertical fans are your ticket to the depths, because the Dragon naturally floats, which means if the fans stop for some reason, you’ll bob to the surface automatically.

While cruising underwater, the driver benefits from a head-up display and a dive management software system that lets novices pilot the Dragon, the same way non-pilots can fly drones.

The Dragon’s internal communication system lets the driver and passenger talk during the dive, and an Aquacom through-water system keeps the boat in touch with the surface as well.

This oughta have you checking your couch cushions for the loose change needed to raise the $1.5 million purchase price.