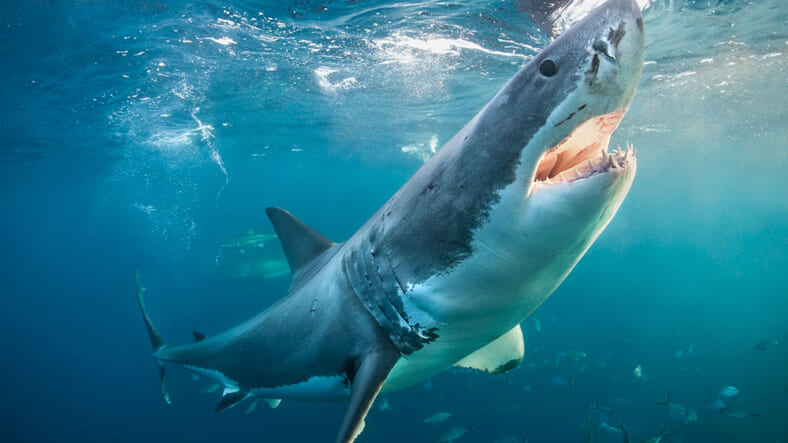 On July 6, 2019 the Boston Globe reported on the sighting of a 13-foot great white shark seen off the coast of Cape Cod, munching on a seal. If the unfortunate seal had only carried a smart phone with an intriguing new app called “Sharktivity,” it might have been spared such a terrible fate.

If you are planning on heading to the Cape or any beachy destination before the summer ends, you can avoid that seal’s fate if you go ahead and grab the app now for yourself.

The app was created by the Atlantic White Shark Conservancy in collaboration with Conserve.io. Here’s why it was made and how it works:

The Atlantic White Shark Conservancy Sharktivity App was developed in collaboration with the Massachusetts Division of Marine Fisheries, the Cape Cod National Seashore, and officials from Cape Cod and South Shore towns to raise awareness of the presence of white sharks off our coast. The App sightings are fed by researchers, safety officials, and users that upload photos for confirmation. By enabling App users to report shark sightings and upload photos for confirmation, we are effectively crowd-sourcing critical data points on where sharks are spotted so as to reduce encounters and promote safety. Data from sharks with acoustic tags and Smart Position and Temperature Tags (SPOT) are also available on the App.

The app serves two purposes: keeping the public informed and, according to the Conservancy, facilitating a “peaceful coexistence between humans and white sharks.”

Conserve.io is all about conservation-related technology, and their mission statement provides a bit more detail as to the reasons for apps like Sharktivity:

Conserve.IO [was founded] with the singular focus of bringing conservation into the 21st century. We are deploying a mix of mobile, web and crowdsourcing technology to simplify and scale the collection of conservation data and to make that data more actionable. By doing so, we will better understand changes to our environment, enact better policy, and facilitate consensus action on that policy, leading to more sustained and prosperous existence for all of us.

Keeping the sharks alive and thriving and keeping people from reenacting scenes from Jaws? Sounds like the best kind of conservation.

You can download Sharktivity for Android here. Go here for the iOS version.