Drones You Control With Your Mind Are Already Here 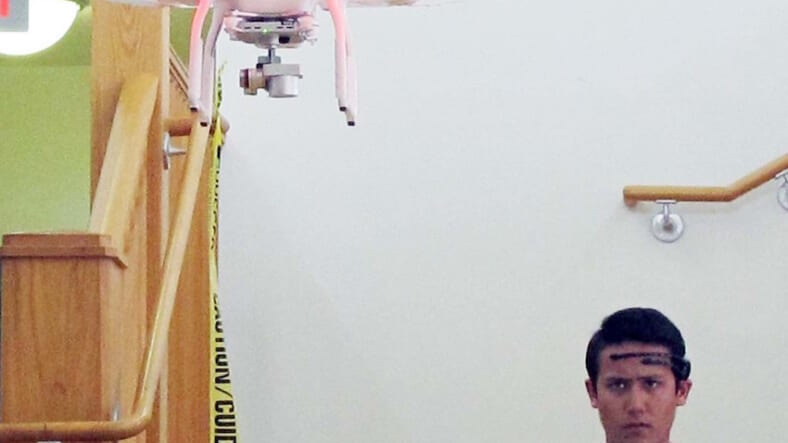 Soon you’ll be able to pilot a drone with your brain waves — if you’re okay with wearing a controller that looks like a brain-sucking alien. Recently at the University of Florida in Gainesville, developers and tinkerers gathered for a brain-controlled drone race, reported the Associated Press. While it didn’t involve the odd brain-controlled interface units actually digging tentacles into the pilots’ cerebellums — we hope — it did require ingenuity and concentration.

The competition — billed as the world’s first drone race involving a brain-controlled interface — involved 16 pilots using willpower to drive drones through a 10-yard dash over an indoor basketball court at the University of Florida this past weekend.The Associated Press was there to record the event, which organizers hope to make an annual inter-collegiate spectacle, involving ever-more dynamic moves and challenges and a trophy that puts the brain on a pedestal.

Chris Crawford, who is seeking a Ph.D. in “Human-centered engineering,” told the AP that the race was intended to “popularize the use of BCI instead of it being stuck in the research lab.” Racers used “consumer brand devices” to create their units, said Crawford, and they pushed those devices’ abilities “to the limit.”

Remarkably, the AP reported that racers in the Florida competition spent a mere $500 for the tech they used.

The units — essentially small eeg machines — worked by reading the electrical activity of a user’s brain and translating that through special programming into commands that were sent to navigate the drones.

The larger picture, according to the AP report, is a future in which BCI devices are trained through reading brain waves to perform a number of tasks activated solely by thought — unlocking cars, interfacing with computers, even monitoring states of consciousness. The latter, as the AP noted, would be pretty helpful for the long-haul trucker who doesn’t realize just how fatigued he or she is by notifying the user a break is in order.

The AP explored further possibilities for such devices in detail, and you can read more here.

In the meantime — this is some very cool stuff but we’d appreciate innovators coming up with a brain control interface that looks a little less like the interface is some creepy alien controlling the brain.

You can also watch the Associated Press video report below.