This Connected iPhone Camera Puts Pro-Quality Photos in Your Pocket 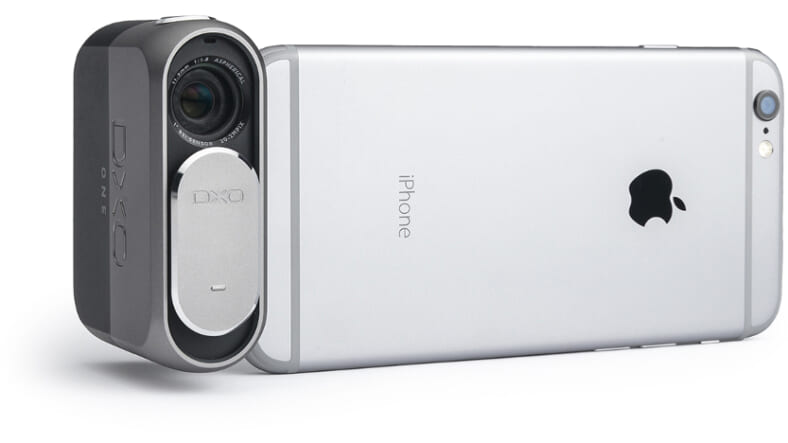 As amazing and accessible as smartphone cameras are, they’re still not on par with the best compact cameras. The last couple years, Android owners could hang a Sony Lens Style Camera, sporting the same 1-inch sensor as their acclaimed RX100 line, on their phone. And now iOS users can connect a DxO ONE—also sporting a beefy 1-inch sensor—to their phone, instantly turning their iPhone into a digital photography powerhouse.

Whereas the Sony is shaped like a lens and connects to an Android phones wirelessly, the DxO is shaped more like a DSLR handgrip and connects physically to an iOS phone’s Lightning connector. So it’s not only two and a half times smaller, but also faster to transfer photos. In the process, it uses the iPhone’s fancy Retina screen as a giant interactive touch display to adjust settings.The ONE can also operate independently of the phone. Put another way, it’s got its own battery and storage, so it won’t drain either of those valuable resources in your phone.Aside from that, the two biggest benefits of using this system over the iPhone’s native camera are the ability to capture incredible shots in low light and all the fancy image processing that DxO is known for in the industry. In other words, if you take your photos seriously (and in a variety of settings), this sophisticated little accessory is a must.

Introducing the DxO ONE Connected Camera from DxO on Vimeo.

This highly pocketable shooter is available for $599, which is less than or comparable to regular compact cameras offering similar functionality. And best of all, the companion app takes full advantage of its direct connection by automatically updating the camera’s functionality. So it’ll only get better with time.UPDATE March 2nd:This morning, DxO released a new update for the camera which adds several enhancements, mostly making it much easier to use when disconnected from the iPhone. (Definitely handy when you don’t want to worry about dropping either device while capturing that perfect action shot.)In this standalone mode with just the ONE in hand, whatever previous still and video capture settings you established when it was connected to the iPhone will be preserved. You’ll now be able to frame your shot using its (albeit small and monochrome, but still more functional) screen. And the advanced viewfinder will also display indicators that relay additional info.When you go to their site to check out these and its other new features in more detail, you’ll probably also notice that the price has dropped a hundred bucks to $499. More capable and affordable? Sounds like a good deal to us.