Finally, the Wireless Home Theater in a Box You’ve Been Waiting For 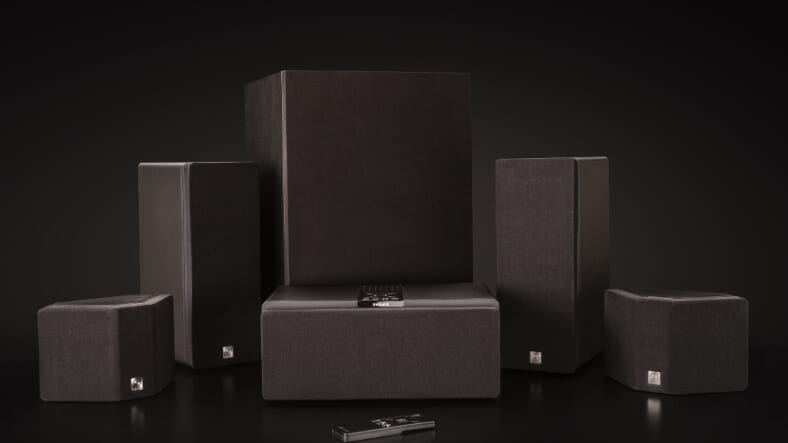 Back at CES ’15 (a little over a year ago), we heard a prototype for Enclave Audio‘s 5.1 wireless speaker system. Especially given that it was in a noisy ballroom at the time, it sounded pretty impressive. But it left us eager to test it in a more controlled environment…which we finally got the chance to do with an exclusive media sample that arrived at our offices this past week.Since the whole point behind going wireless is to make set-up easier and less cluttered, the installation process was the first test. And it didn’t disappoint. In fact, it took us longer to unbox the speakers (17 minutes) than it did to get them plugged in and in position (16 minutes).The key to the system lies in the control console built into the center speaker. That’s where you plug in your HDMI, optical and analog sources. It’s what synchs up the other five speakers using a proprietary wireless band that doesn’t conflict with Bluetooth or Wi-Fi. And what controls the inputs and options. (There’s also a simple remote that duplicates those controls.)For what it’s worth, our production unit has the exact same inputs as pictured below, but the HDMI out jack is positioned differently.

With your sources (Blu-ray, set-top, console, etc.) plugged in and an HDMI sending video up to your TV, you’re good to go. You can also just send wireless audio from any phone or tablet to the system through Bluetooth. So as long as you’ve got enough outlets, there’s not much brainwork at the outset.After all that, how was the sound? We were impressed! We didn’t detect any latency or weird lip synch issues. And even if we had, we could’ve made adjustments in the settings.In early February (i.e. a week or so), you’ll be able to pre-order this whole system on the Enclave site for $1,200—less if you subscribe to their newsletter or want fewer speakers. And when they fulfill those orders in March, they’ll also be releasing an app for Android and iOS, for your streaming pleasure.