But this is no video game. 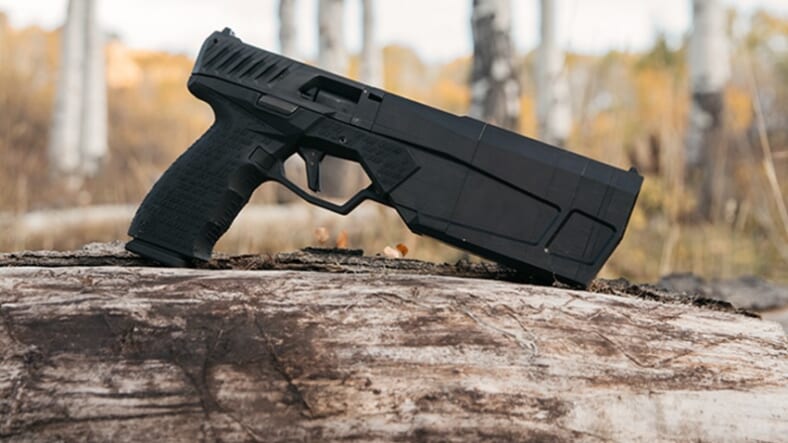 We really should have caught on to the fact there’s a killer 9mm handgun with a built-in suppressor named the Maxim 9 sooner. But Task & Purpose got our attention by highlighting the recent short film above, which was posted in mid-August by the gun’s maker, SilencerCo.

If you’ve been considering leveling up with your personal firearm game or even purchasing a first gun for home protection, the first-person shooter feel of SilencerCo’s “Behind the Sights: Maxim 9 FPS” will probably give you pause. It’s a well-made little short with a smooth, professional feel and compelling soundtrack.

Scenes swing between tense and touching. You’re a homeowner responding to an intruder in the dark. You’re a contractor or special operator attacked by jihadis—and then you’re a dad teaching his daughter to properly fire a Maxim 9.

T&P pointed readers to another SilencerCo video from 2015, and if anything it’s even more creative. “Maxim Vice” has a Miami Vice vibe as the protagonist takes on bad guys wielding his silenced 9 mm.

SilencerCo describes its product this way:

The Maxim® 9 is the world’s first integrally suppressed 9mm handgun that is holster-able and hearing safe with all types of 9mm ammunition. Shipped in its full-length configuration, the Maxim 9 comes with everything the user needs to shorten the overall length by more than 1”; in the short configuration, the Maxim 9 remains hearing safe with subsonic ammunition.Regardless of which configuration you use, the Maxim 9 represents one of the greatest strides made in both pistol and suppressor technology. No more choosing between keeping your pistol as short as possible and enduring deafening sound or adding a silencer and dealing with the added length and weight. Now, you can have the best of all worlds with the Maxim 9.

The Maxim 9 is listed at $1499 USD. Its tactical value explains the price—no need for ear protection in target practice and if used in the field the suppressor can provide a psychological edge in focus and concentration for the gun owner.