It’s a like a golf cart mated with an electric skateboard. 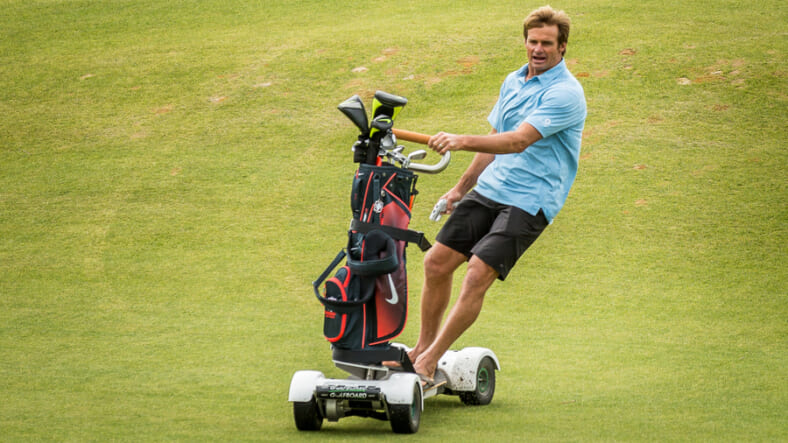 Even more than the fact that I hadn’t played in a year, this past Sunday as I approached The Ranch in Western Massachusetts, I was anxious to get out on the course because they were going to let me ride a GolfBoard.Specifically, one of the club’s co-owners, Vic, graciously took me out on his own personal vehicle. And after riding it for nine holes, I’m not sure how I’ll ever want to golf without one.

GolfBoard was co-founded by amazing octogenarian Don Wildman (who also founded Bally’s Total Fitness) and world-class surfer Laird Hamilton. So I was guessing it’d be fun, but surprised at how stable the thing was. I could lean way over without tipping.Whether cruising the cart path or carving all over the course—especially down the fairway of The Ranch’s 16th, a former ski slope—it was solid. Low gear was easy for getting used to the thumb-controlled throttle and balance of steering.

And shifting into high gear (which went up to about 14 MPH on Vic’s model) on the fly was great for zooming longer distances.

Aside from the fun factor, it does speed up the game a bunch—partly because the GolfBoard’s lighter weight and smaller wheels enable it to go more places without harming the course.You hop on, go right to your ball (unless it’s in the sand or water) and hop off. That makes it feel like an organic part of the game, as opposed to trolling around in a disconnected feeling cart you have to park and walk from.As I proved, you don’t have to be a surfer or even a good golfer to ride it. In fact, if you’re at all into golf, this should sway you into hitting the links. Before you lease or buy one (starting at $6,500), find a course that has one to try it out. You’ll be glad you did.