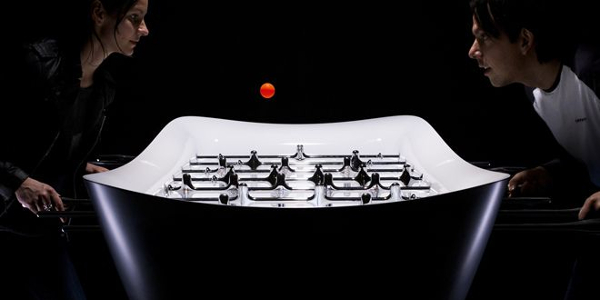 Paying homage to both the number of players on a soccer team—which they apparently refer to as “football” in the rest of the world—and the title of Pele’s 2007 autobiography, GRO design created the uber luxurious “11 the beautiful game” ultra luxury foosball table.The striking design of “11” (for short) was inspired by the sweeping lines of modern soccer stadiums, with an onyx exterior and contrasting plain white interior that visually draw your eyes right into the action, where both teams of individually numbered simple chrome players battle for ultimate rec room bragging rights.

Sure enough, it’s neither boxy, plastic, nor colorful. The complete antithesis to everything you knew and believed foosball to be. But that needn’t stop you from drinking beer and talking trash, the other two main things that encapsulate this highly competitive table sport.

Handmade to order with special customizations available, the Classic Black and White version starts around $96,000. Yep, you read that right. Watch the whole story of why you should buy it in the video above.

If you—or more likely your overvalued tech company—have the disposable means, head on over to 11thegame.com and make an inquiry.