The iPhone 12 Pro: A Hands-On Review 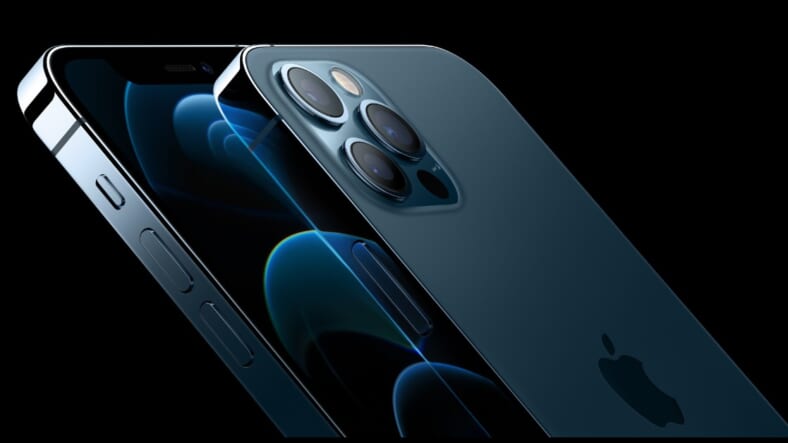 It’s time to review the brand-new iPhone. In a year that was way, way weirder than most, the familiar feeling of unboxing the iPhone 12 Pro still carries with it the anticipation and excitement of opening a holiday present. Coincidentally, that’s also where the iPhone 12 Pro falls; in the comfortable zone between familiar and thrilling.

First, the familiar. The iPhone 12 Pro barely changes the form factor that Apple has adopted after ditching the front-facing physical button of yesteryear. The full glass front with an oddball notch jutting from the top makes for an identical user experience that started with the iPhone X. That said, Apple has eschewed sleek rounded corners for the hard-angled outer frame made from surgical grade stainless steel that makes the entire iPhone 12 lineup harken back to the popular iPhone 4 and 4S. The 12 Pro is a hefty little machine without feeling bulky. It’s dense and feels significant as a result.

In terms of nuts and bolts, that heft is likely a result of packing the 12 Pro wall to wall with Apple’s latest guts. The A14 Bionic chip and the ecosystem Apple’s built around it absolutely smokes the competition. Responses to your commands are lightning fast. FaceID unlocks the phone in a true blink of an eye. Siri can be summoned instantly, even while video is playing. The 12 Pro has power on demand and that’s a necessity for the device that most people live by.

Speed and response-time come off as a priority in this iteration of the iPhone and servicing that goal is where the excitement comes in. In testing, there are three major improvements that give the iPhone 12 Pro it’s quickness: 5G, LiDAR and MagSafe.

5G is entirely about connection speed. Here in NYC, it seems to make a noticeable difference, though the spottiness of the USA’s 5G network will definitely yield a “your mileage may vary” experience. That said, where it does work, a 5G connection absolutely demolished load times. In fact, anyone that has ever been irked by the endless, inexplicable spinning wheel when checking email or waiting for YouTube to buffer will be pleased to find the 5G connectivity of the iPhone 12 Pro has made them a thing of the past. The internet feels instantaneous now.

LiDAR, the new feature of the 12 Pro’s camera sensor array, may seem like a niche perk. Enabling the new phone to accurately and quickly calculate distances, Apple has pegged this new feature as a means of enhancing augmented reality experiences that are, largely, still in their infancy. In practice, the LiDAR sensor gives the 12 Pro’s camera functions lightning-fast focus and incredible low-light response, whether it’s taking photos or video. It’s a small but noticeable difference when shooting on the phone that makes the entire camera feel more professional and responsive. It’s another feather in Apple’s cap as they push for the iPhone to be taken seriously by amateur and professional creators alike.

The same way LiDAR enhances the camera, MagSafe gives a significant boost to charging. Sure, these iPhones will still work with Qi wireless chargers but rest the iPhone 12 Pro on a MagSafe wireless charger and the improved battery seems to simply soak in the power. While Apple seems to be focusing entirely on charging or sticking accessories together, expect third-party accessory makers like Belkin or Logitech to fill in any cracks in Apple’s accessory lineup and leverage hard on MagSafe’s abilities.

All said and done, Apple has yet again created a lustworthy piece of hardware that’s as easy to pick up and use as it is to be seen and envied. For those upgrading from last year’s 11 Pro, there’s plenty of quality-of-life niceties to be enjoyed. For those upgrading from literally any other iPhone, welcome to the future. The iPhone 12 Pro (as well as the regular iPhone 12) are available now.