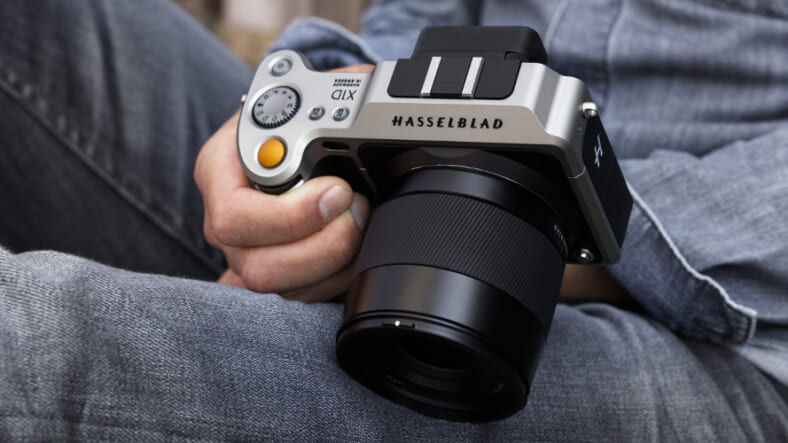 Building on a rich 75-year heritage that’s included the specially modified cameras used by Neil Armstrong to capture the lunar landing on film, this past week Hasselblad announced their new X1D, one great leap in the world of digital photography.The fact that it’s the first compact mirrorless medium format digital camera is a big deal, because it puts professional-quality images in a format that’s more within the grasp of consumers (assuming they’re willing to drop about $9,000 for that quality).

To put this feat in perspective, at around 1 1/2 pounds, the X1D is less than half the weight of Hasselblad’s own recently released H6D, which uses the identically robust 50-megapixel sensor. In fact, it’s smaller than most DSLRs. But the X1D is still loaded with all sorts of high-end features.For instance, it offers an ISO range between 100 and 25,600, along with shutter speeds from 1/2,000th of a second up to 60 minutes, with full flash synchronization throughout. Toss in 14 stops of dynamic range and that adds up to amazing shots in pretty much whatever light conditions you can throw at it.

In addition to all sorts of customizable preferences, it’s packed with other smart features. Such as the fact that when you turn the physical mode dial, an icon of the dial appears on-screen.

Not such a big deal if you’re holding the camera away from your face and looking at the 3-inch interactive touch display; but hugely convenient in not having to look away or fumble about when peering directly through the electronic viewfinder.

As fancy as it is, it’s also fairly durable. The exterior is dust- and weather-proof, with O rings protecting each of the dual flaps that cover the device’s twin SD card slots, dual audio jacks, USB 3 and Mini HDMI ports. Plus it’s wireless, sporting GPS and Wi-Fi connectivity.Overall, it’s really quite a well-designed digital camera that should make you think twice about your next big photography purchase.