The Mate X is the Galaxy Fold’s upstart rival. 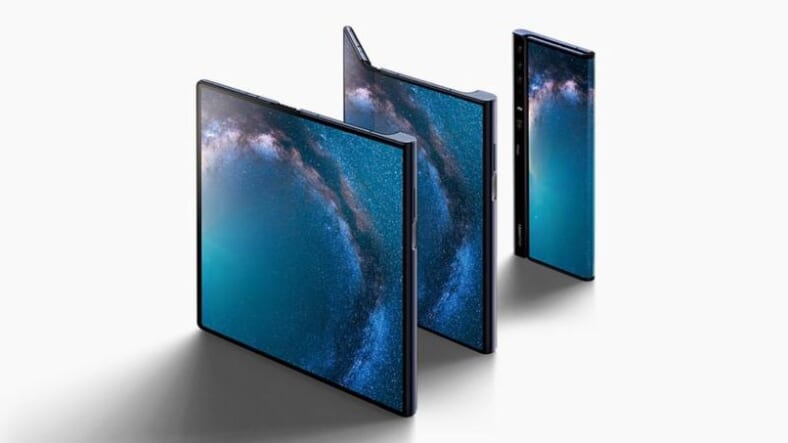 There’s a new competitor in the race to release a foldable smartphone.

Huawei revealed the flexible Mate X handset at the 2019 Mobile World Congress days after Samsung dropped a first look at the Galaxy Fold.

Like its rival, the futuristic device will also have 5G connectivity. But as New Atlas notes, the Mate X folds in the opposite direction when closed, meaning the screen wraps around the outside.

The feature is made possible by a “Falcon Wing Mechanical Hinge” that Huawei claims won’t stretch when folded over or bulge when laying flat.

The display measures 8 inches in tablet mode, giving it .7 inches on the Samsung. When folded, there’s a 6.6-inch display in the front and a 6.4 inch display in the back. This innovative design allows for both a subject and photographer to preview a pic before its snapped while using the Leica triple-lens camera.

New Atlas has further details on other notable features, including an ultra-fast charge time:

Inside you get the latest super speedy Kirin 980 processor from Huawei, paired with 8 GB of RAM and 512 GB of internal storage. The fingerprint sensor is built into the power button for one-touch unlocking. Other highlights include a 4,500 mAh battery (split into two sections) [and] fast 55W charging that gives you 85 percent of a full charge from zero in 30 minutes.Huawei says the on-board software will adapt to suit both open and closed modes. If the phone screen is laid open, the extra screen space can be used for movies and photos and so on, or a split screen mode can be set – enabling you to drag pictures from a gallery into an email, for example.

No official release date for the Huawei Mate X has been announced, but expect to pay roughly $2,605 if the Chinese electronics giant decides to sell it stateside.