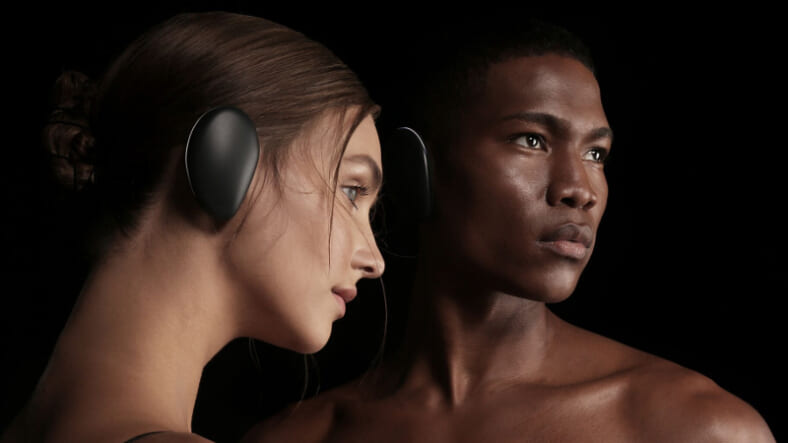 As Caddyshack‘s Ty Webb philosophized: “A flute with no holes is not a flute. A donut with no hole is a Danish.” So what does that make a set of headphones with no band connecting them around your head?Human Inc.’s audio product—simply called Sound—goes right on your ears. So “headphones” seems like too much and “earphones” not enough. For now, let’s refer to these funky-looking things as “earpads.” Whatever you call them, and however silly looking they may be, they may revolutionize the way you think of and use personal audio equipment.

To order them, Human will offer an app that uses your smartphone camera to choose which of the four available sizes (that combined can reportedly accommodate over 95 percent of us humans) will best suit you. (No information was available for Vulcans or Elves.)After wirelessly charging Sound, they’re supposedly good for 12 or more hours of music and phone calls. To control those experiences, just swipe the cups’ touch-enabled outer surfaces. In addition to the typical track and volume kinda stuff, you can adjust the degree of ambient noise isolation.

In the other direction, you can amplify your audio experience. Placing them together turns them into a (supposedly) room-filling speaker. And they can be grouped—presumably through the app—to play the same tracks through multiple sets, creating a whole Sound system. (Our bad pun, not theirs.)It’s also packing some amazing other features. They’ll be able to instantaneously translate spoken foreign languages. You can use them when working out to track advanced biometrics. Plus they’ll lull you into slumber with special rhythms, record your sleep cycles in low power mode and gently wake you to your chosen playlist.

Their Indiegogo campaign is already way over its funding goal, but you can pick up these revolutionary earpads for $200, a 50 percent discount off what they’ll retail for when they’re released next summer. And while we suspect they’ll probably warm your ears up in a way that’s more conducive to fall and winter, we’ll give them a shot in any season.