Apple is penciling in some improvements to its iPad Air and iPad Mini. 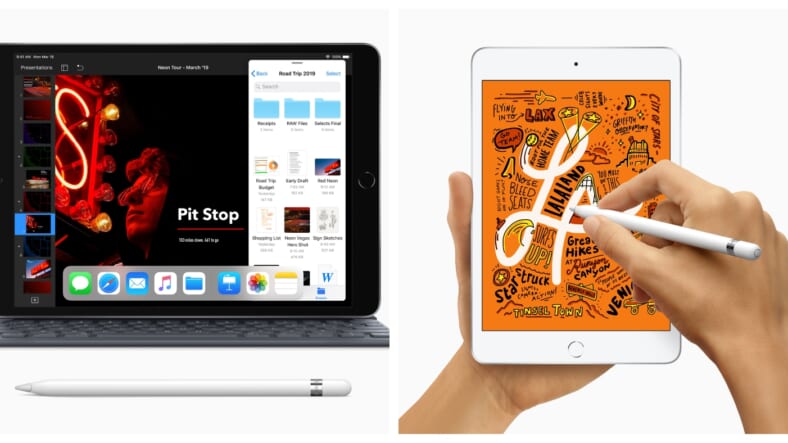 If you love the iPad Mini and have been worried that Apple was ready to trash its smallest tablet, fear not. Not only is the Mini sticking around, a new, upgraded generation will work with the first generation Apple Pencil (the one that charges via lightning connector), previously only usable on the early generations of the iPad Pro.

A new, 10.5-inch iPad Air will also work with the Pencil, and Apple won’t stop there. The Air may soon be its go-to tablet, given new features it has basically inherited from the now-discontinued 10.5-inch iPad Pro—a keyboard connector, use of the Pencil, and a pumped up processor. Inverse has more details, including cost:

The new iPad Mini, starting at $399 for Wifi connectivity or $529 to add cellular, is the first major update to the tiny tablet in nearly four years. The new chip means three times faster speeds and nine times faster graphics than its predecessor, while the laminated screen with true tone and wide color gamut support offers 25 percent higher brightness. Its compact design means it fits in a big coat pocket, and Apple Pencil support makes it a useful sketchbook for artists on the go:The company also released a new 10.5-inch iPad Air, priced at $499 for Wi-fi connectivity and $629 to add cellular. It’s the first iPad with the “Air” moniker since its predecessor launched in 2014. Like the Mini, it offers a laminated screen with true tone and wide color gamut support. It offers 70 percent faster speeds and double the graphics speeds when compared with the $329 9.7-inch iPad.

You get the usual colors: silver, space gray, rose gold, and the Mini and jumped-up Air will have a choice between 64GB and 256GB of storage capacity.

For Apple these are major advancements in their basic tablet line, even though neither the Mini nor Air will have the speed or flexibility found in the Pro line.

Of course, they won’t have the cost either, given the cheapest iPad Pro you can get is the 11-inch basic, for $799.

In the end, these are still classic iPads, with the thick bezels now gone from the phones and the most recent iPad pro, but they may be more useful than ever and part of a bid from Apple to maintain market supremacy over surging competitors like the continually-improving Windows Surface.

You can dig deeper into the details here, with Apple’s detailed press release.

This was, for Apple, a particularly low-key rollout. What will that mean for the Apple event set for March 25 (see above)? There might be some major surprises in store. You never know.