This Is the Saddest Sexy Robot We’ve Ever Seen

The future of robot lovers is here and it’s incredibly depressing. 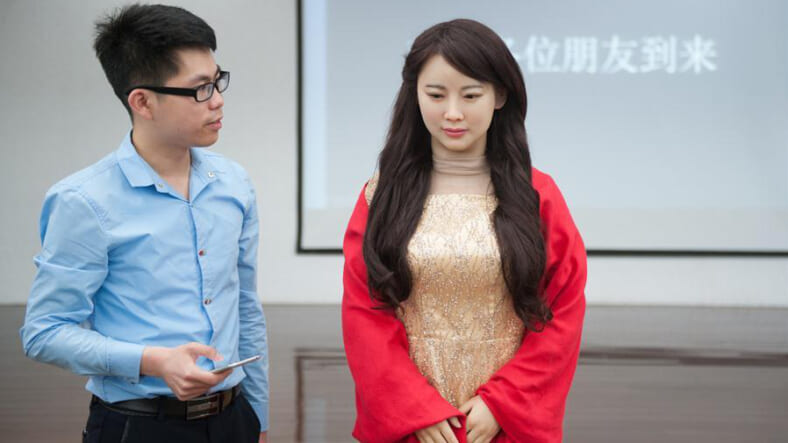 Until the inevitable robot uprising, we are their masters. So while we can, it makes sense to have them serve us. And hey, it doesn’t hurt to make the especially lifelike ones easy on the eyes.To that end, robotics researchers at the University of Science and Technology of China have developed and this past week introduced us to Jia Jia. True to her name (which she shares with a popular Singaporean panda), she seems “beautiful and fine.” But this attractive, lifelike, interactive android has an inexplicably sullen default expression.Maybe it’s because of what she has to say. For instance, upon being switched on, she addressed team director Chen Xiaoping as “Lord.” And when she sensed a photo being lined up, she said, “Don’t come too close to me when you are taking a picture. It will make my face look fat.” Forcing her to act in a stereotypical, submissive manner makes about as much sense as (noted in Family Guy) programming C3PO to worry in every situation. It’s boring, it’s sad, and it’s not sexy in the slightest.

Building on her current abilities already three years in development, her human superiors hope to make her a “robot goddess” capable of deep learning, facial expressions and conveying emotions.In the meantime, she’ll be on display starting tomorrow at this year’s International Technology Fair in Shanghai. Maybe for the show they could give her a firmware update to help her to be more confident and slightly perkier?