The Drinkworks Home Bar makes single-serving cocktails as easily as a regular Keurig brews a cup of coffee. 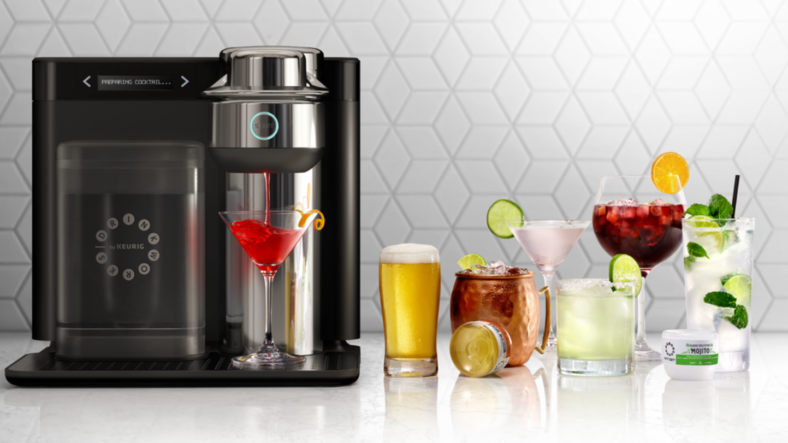 For anyone coming home from a truly taxing and stressful day on the job, the small but persnickety task of muddling the mint in a delicious mojito or crushing ice cubes for the perfect a Moscow Mule sounds seriously ambitious.

So the good people at Keurig, the household name in single-serve coffeemakers, saw an opportunity and came up with a new single serving machine for cocktails, the Drinkworks Home Bar.

[Drinkworks] a black and chrome box with a water tank (similar to the Keurig K Cafe espresso maker) that allows pods, which contain the ingredients for a cocktail, to make an instant alcoholic beverage—including the booze.According to Keurig and their partner, Anheuser-Busch InBev, there are pods for 24 different kinds of beverages that include beer, cider, and over a dozen mixed drinks. Among some of the cocktails are an Old Fashioned, Cosmopolitan, Margarita, Moscow Mule, Mojito, Red Sangria, White Russian, White Wine Peach Sangria, Lime Vodka Soda, and Gin and Tonics.

Take that in for a sec. Simply grabbing a pod, popping it in, and just like that, something good for what ails ya.

Okay, but how good is it, really? The Keurig for coffee is tried and true. It was a mainstay in many workplaces as long as 18-19 years ago before being sold for home use, and now it’s just another appliance, often the favorite due to what a time-saver it can be.

Engadget tested Drinkworks. They found that it’s just as easy to use as the coffeemaker, but things aren’t so simple when it comes to actually making a drink:

Obviously the big question, though is, how does it taste? And here’s where things get a little more complicated. I had an Old Fashioned and Moscow Mule: Both were perfectly serviceable, but neither was great.

The Old Fashioned was a little sweet for my taste and the Moscow Mule definitely would have benefited from being made with freshly squeezed lime juice instead of a concentrate.

But I’ve also been served much more offensive things at a bar and paid three times as much as Drinkworks is charging. (What kind of monster muddles both a cherry and an orange in the bottom of an Old Fashioned then tops it off with seltzer?)

In this way Drinkworks certainly sounds like the Keurig coffee machine as well. Some people just want to wake up and get moving and for them any old K-cup is probably fine. But coffee connoisseurs consider single-serve an abomination.

So it’s likely that it’ll be easy to please a fairly large number of customers with the Home Bar, but those who consider themselves aficionados of top-shelf cocktails probably won’t be thrilled.

Leave them off the invitation list when planning Christmas or New Year’s party invitations.

Keurig began rolling these out in Missouri in early November and they are available on pre-sale now. The Home Bar will hit store shelves in 2019.

It costs $299, but Drinkworks probably pays for itself in a few weeks, given a one-night bar crawl with friends can end up costing half that price.