This Is the Loudest Cooler You’ll Ever Hear

And probably the heaviest, too. 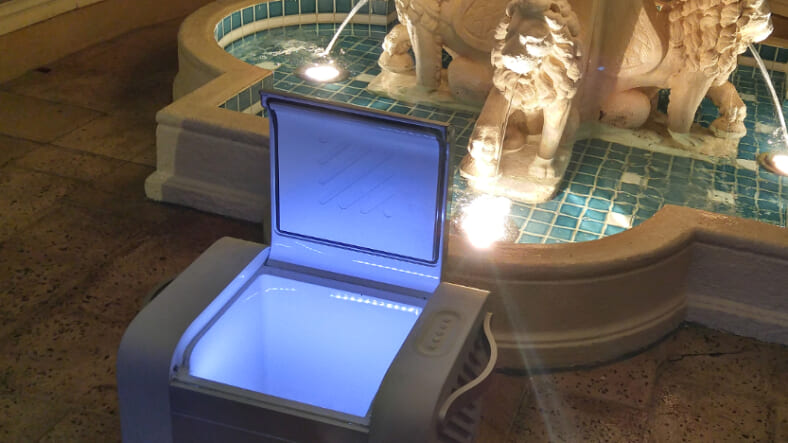 When I first heard about Kube, I assumed it was a fancy cooler that just happened to have speakers. I had it backwards.In fact, not allowed to fully show off its audio prowess at Pepcom’s Digital Experience press event last night at #CES2016 (for fear of offending other exhibitors and attendees—and potentially, residents throughout the greater Clark County area), the fine folks at Kube Sounds threw an afterparty yesterday in a posh Villa at Mirage.As personally witnessed, this 400-watt powerhouse pumps out a full 125 decibels of monstrous yet clear audio, supposedly able to be heard up to 500 feet away. (We believe it!)Additionally, its super-long range Bluetooth antenna is rated to connect wirelessly to your audio device up to 400 feet away. That means your phone could be at the bow of your sport yacht and you could easily be enjoying the tunes from it at the stern of the boat. Or more directly, you could just plug right into the 3.5mm jack. Either way, it’ll supposedly rock for 20 hours, even at loud volumes.And though it seems like you’d never want to mix beer and stereo equipment, this slick, beefy, weather-proof boombox also contains a cooler. Press the latch release on the front, the lid opens, a light pops on and you can see the contents chilling in its 35-quart belly, whether they be beer cans or champagne bottles standing straight up.

Although they refused to tell us how much this 60-pound outdoor audio wonder would cost or when exactly it would come to market, they proudly assured us that what we were looking at and listening to was—after several iterations—the final production model. Our wild guess is something in the $800 or $900 range. But whatever and wherever its range, you can be assured it’ll make for one explosive party.