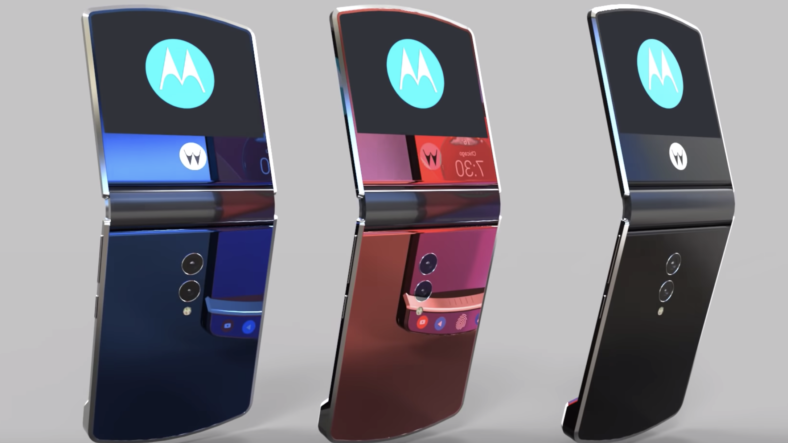 The image above was just a concept when it was first seen in a video in 2018. Now it looks more than ever like a new generation of the iconic Motorola Razr is definitely on the way, this time as a foldable smartphone that looks a lot like these 2018 renders.

Latest evidence: Apparent renders leaked from Motorola itself. See below.

The images appear to show an unfolded phone—looking exactly as patent plans predicted—a folded phone, and the other contents of a next-gen Razr’s triangular box.

Phone Arena breaks down what we may be looking at here:

As expected, the Motorola Razr (2019) ditches the physical button layout and small screen found on the original in favor of a modern 6.2-inch display that stretches from top to bottom thanks to its 22:9 aspect ratio. Due to the smartphone’s unique shape and form factor, the edge-to-edge panel is forced to adopt some rather unique angles towards the top and bottom. This isn’t helped by the wide notch that is present above and home to an in-ear speaker.Keeping things in line with 2004’s RAZR V3, the foldable edition sports a huge chin below the display. But rather than laying flush against the display as is common these days, the chin actually represents a rather large bulge which matches the thickness of the Motorola Razr when folded shut.

It looks like the box also comes—or will come—with a USB-C cable and USB-C headphones. It also looks like it’s accompanied by a high-speed charger and 3.5 mm adapter for the headphone jack. If accurate, then you can mark the new Razr as yet another smartphone ditching the classic port.

Even if this leak is the real deal, everything could change by the time the Razr hits store shelves. After all, as the Samsung Fold proved in such embarrassing fashion, electronics manufacturers are still working out the bugs in foldable screens.

Let’s hope the wait for the Razr’s final form—which may cost up to $1500—will be worth it.