This Futuristic Wristband Is a Life Hacker’s Dream 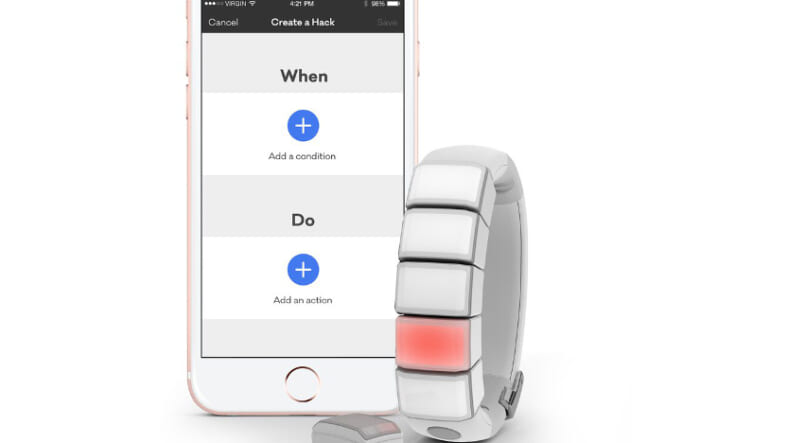 Even the best remote control isn’t much good if you can’t find it. And aside from the occasional stray software update for the higher end ones, they don’t change much over time. Not the case for Mighty Cast’s highly versatile Nex Band, which you wear on your wrist and can customize on-the-fly to your heart’s desire.Its special sauce is made up of Mods, interchangeable buttons you can quickly program to display or do almost anything. For instance, you could program certain color flashes or vibrations to indicate that specific contacts have reached out to you on social channels, or that you’ve achieved a particular fitness goal.Pressing the five buttons could be coordinated to represent standard music controls. But since it’s compatible with IFTTT (the “If This Then That” app) they could also be set to do completely independent stuff, like starting your coffee maker, opening your garage door, answering your phone, or (as was recently announced at #CES2016) adjusting your smart lighting or thermostat. To some degree (however connected all your various devices are) its functions are unlimited.Oh and, you can also swap Mods—either by yourself or with friends. This is key because they can contain stuff. Think game hacks, notes, and photos. The kind of stuff you’d want to trade with your buddy like baseball cards of ancient days.

Having said all that, it’s neither the sleekest nor chunkiest thing we’ve seen folks put on their wrists. But it certainly does the most. Looks aside, any self-respecting life hacker really oughtta have one.The band itself is available for preorder in black or white and either of two size options for $100, a third off the retail price. And extra Mods go for $13 a pop. Expect this otherworldly tech to arrive on Planet Earth for human consumption sometime this spring.