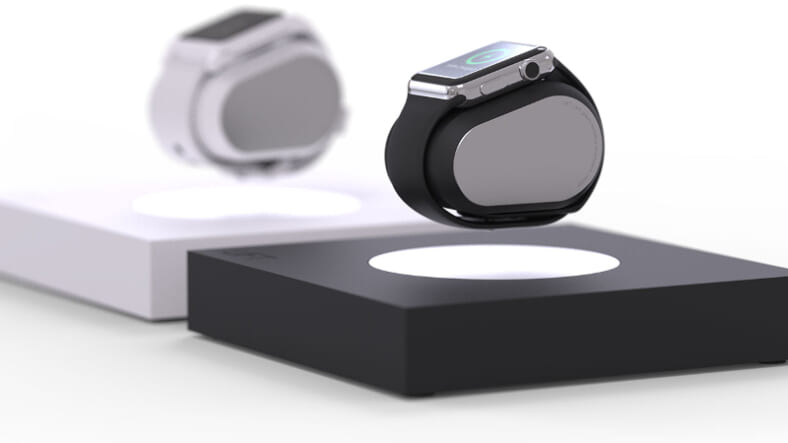 Smartwatches—our most beloved wrist-bound tech accessories—have become indispensable. So of course we don’t want to be without them as if, say, they should run out of juice.That’s why the folks at Levitation Works have created Lift, which wirelessly charges your favorite mobile devices. It’s designed to magically both levitate and power up Apple and Pebble smartwatches, using a handsome minimalist base and special charger module both fitted with proprietary magnetic induction technology.

One of its secrets is that although it can’t float your phone or tablet, it can actually charge them wirelessly as well, using the popular Qi standard, by simply placing your mobile right on the base. In fact, it can do so on-the-go, thanks to a built in 800mAh battery (good for two smartwatch recharges and emergency power for your phone).If you’re a true power user (ahem), you may want to upgrade to the Lift Pro model. The Pro has a built in micro-USB or Lightning connectors to directly charge your Android or iOS phones and tablets respectively.And for when you’re not charging any of your various devices (hey, it happens), you can purchase their Orb accessory, a spherical light that shines as it floats and bobs over the Lift base.

Lift’s Kickstarter campaign is already almost 4X funded and still has 41 days to go. But you can get special pricing on the Lift ($159, a $90 discount off the expected retail) and Lift Pro ($199, a $100 discount) models. And you’ve got options to substitute or add the Orb light in your wireless charging package.Whatever you decide, if all goes well, you’ll only have to wait until October for delivery. That gives you two months to obsessively stare at your watch in anticipation, which will ironically no doubt cause it to run out of juice.