Capture everything from the palm of your hand. 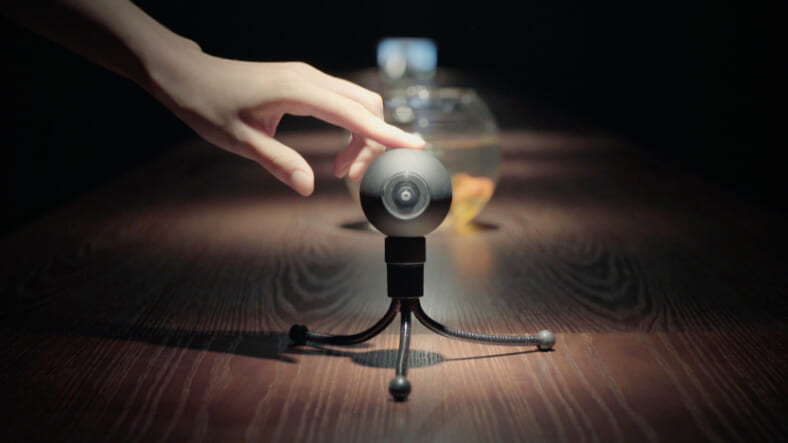 In the 2010 remake of Clash of the Titans, the Stygian Witches used a creepy all-seeing eye the size of a billiard ball. The panoramic Luna video camera offers a similar form factor, making it the world’s smallest 360 cam. But it offers a much wider view—and as a plus, works for non-witches.Adding to the functionality of its dueling 190-degree lenses instantly auto-stitching together to create totally immersed stills and video, Luna is waterproof and incorporates gyro stabilization, freeing you to shoot everything, anywhere and anytime. Wi-Fi lets you both preview pictures on your phone and lets others live stream those images, with the ability to independently pan at will. It’s pretty much the next best thing to actually being there.The 85-second video below shows off one of its four shooting modes that flattens out the spherical images into a rectangle—making for such interesting and visually confusing situations as people who are really sitting next to each other appearing on opposite sides of the frame; a skater going up a pipe on one side of the picture and coming down the other; and people seemingly standing side-by-side who are in fact across the street from each other. (As a side-to-side note, you’re not just limited to 360 shots. You can crop out regular 2-D images as you like.)

This wonder photo ball has already more than double-funded on Indiegogo. So unfortunately, the “mega” and “super” early bird levels are long gone. But the regular one ($299) is still available. And if they raise another $64K, they’ll hit their Live Broadcast stretch goal. Should you invest in one? Up to you, but keep in mind that hindsight is 20-20 and foresight is 360.