These Giant Fighting Robots Will Battle Next Month for World Supremacy

May the best machine win. 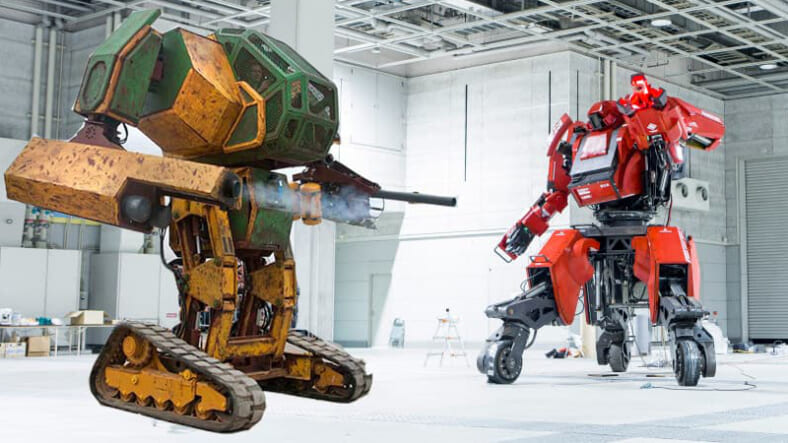 In an epic battle sure to join the ranks of Frazier-Foreman, Foreman-Ali, Tyson-Holyfield, Pacquiao–Mayweather and Holm–Rousey, the stage has been set for two giant hydraulic, gas-powered robots—Team USA’s MegaBot and Team Japan’s Kuratas—to fight in an epic scrap in the name of national mechanical pride.After throwing the gauntlet last July, the young upstarts at MegaBots launched what would eventually become a successful Kickstarter campaign, raising over $550,000. The idea was to make the MegaBot Mark II more combat-ready, since part of Suidobashi’s acceptance response involved upping the challenge to a hand-to-hand fight. (Previously, MegaBot hurled 130MPH paint cannonballs and its opponent rapidly fired BBs and randomly fired water bottles.)

Looking to the future, MegaBots wants to establish giant fighting robots as a sport with an official worldwide league and everything. With all that riding on the perceptions of this first battle, they’ve secured over $2 million in additional seed funding. And they’ve partnered with some impressive heavyweights across several industries, with the idea of making a faster, more powerful, self-balancing and seriously armored 12,000-pound MegaBot.Its 9,000-pound opponent does sport smile-activated Gatling guns. But Kuratas’ articulated glove-controlled humanoid hands seem like they’d be more useful in melee fighting. It also features something called Rainbow—which looks and sounds impressive, although we’re honestly not sure what’s going on in the linked video above and beyond the dramatic special effects.

Loaded with heads-up displays and literally tons of other tech, both robots look impressive in their own way both inside and out. But which will win bragging rights when they suit up and actually spar, and which will go down in a blaze of glory?They’re still working out the logistics of the venue (presumably along with how to transport the colossal combatants across international borders). So stay tuned. In the meantime, you can satisfy your mechanical bloodlust by dialing up the much smaller but still satisfying BattleBots, when it returns for Season 2 next month.