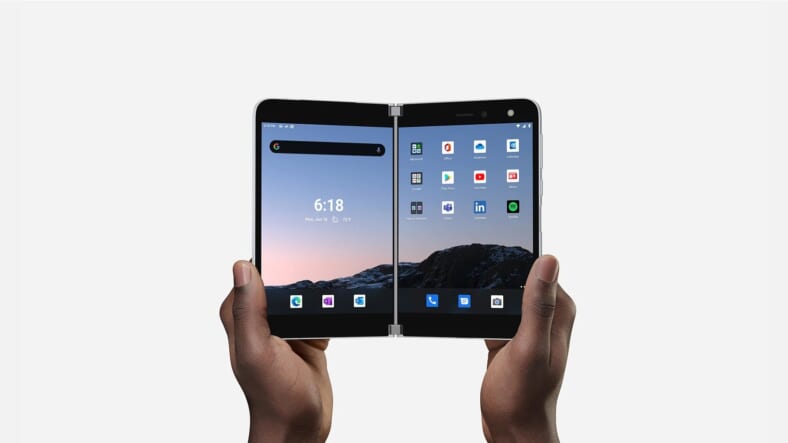 Ever wondered how great it would be to get more done — as in, a heck of a lot more — right from your phone? How about working from what’s already being billed as the “world’s thinnest foldable smartphone“, aka the new Microsoft Surface Duo Phone? It goes on-sale next month, and it just might change the way you work. In our tech-heavy, screen-obsessed day and age, the ability to zip through tasks breezily and easily is a luxury, and it looks to us like this phone has just what you need — times two, in fact.

It’s an innovative LED dual-screen mobile phone developed by the Surface team for maximum functionality and utility. What’s more, it could just be what you need in your life as you work from home and juggle, well, everything that comes with this new normal. The rest of the time, when you’re on the go? The Surface Duo will come in mighty handy there, too.

We’re talking built-in Microsoft 365 access and every Android app available in the Google Play store, for starters. It’s like having a two-screen computer set-up, just in pocket-sized form. As Microsoft points out, you can type on one screen and view another screen, or else pull up separate apps on each screen. It all centers around (literally) the 360-degree hinge design, and the fact that it’s compatible with the Surface Slim Light Pen for sketching on-screen only makes this phone even more functional and dependable.

And the rest of this phone’s features certainly hold up under the spotlight — keep current specs you know and love, like portrait mode for photos, among others.

As one might expect, the catch comes with the price tag — nearly $1,400 to pre-order this sharp, tech-forward phone right now. But when you consider its utility and penchant for innovation — plus the fact that, yes, you’re getting two screens — that price tag really isn’t so bad at all now, is it?