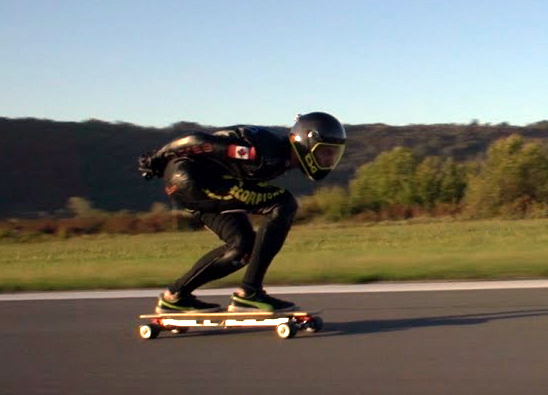 Having personally ridden an electric self-balancing board at a paltry 15 MPH and an electric scooter at 20 MPH, I can attest to how fast they felt. So it’s with the utmost respect (and slight envy) that I report a guy bravely went three to four times as fast on nothing more than a motorized electric longboard.Czech-born Canadian Mischo Erban was able to reach about 60 MPH—and in doing so, set the official Guinness World Record—while testing a modified four-wheel drive Nextboard prototype in Portorož. As you’ll see about halfway through the video, while zooming along at this ludicrous speed, he takes a serious spill.

No stranger to speed, Erban also holds the world record for non-motorized skateboard speed, having bombed down a public Canadian road—with oncoming traffic, no less—at a blistering 80 miles per hour. (You know it’s fast if we spell it out like that.) Perhaps that speed’s also possible on the electric version, cause he reported that at 60 he didn’t even have the Nextboard’s remote throttle trigger squeezed all the way.And the need for speed burns on.