A blend of old and new school journaling. 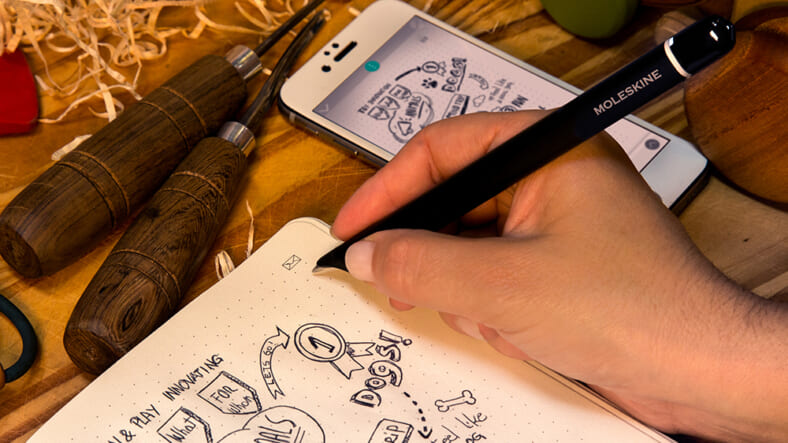 Phones have gone from simple calling devices to having keyboards to, with the recent creep in their size, physically write notes right on them. But something about scribbling on a screen with a stylus just doesn’t feel natural. Those who want a blend of analog and digital note taking should take a look at Moleskine’s new Smart Writing Set. By writing with ink in their special notebook, it stores your scrawlings—and can instantly display them on your phone or tablet—thanks to companion apps on Android or iOS.

If you’d like to narrate your notes, the apps can activate your device’s mic and voila, you’ve got multimedia journal entries that can be colored, shared, organized and (after automatically transcribing) searched on.

Admittedly, this isn’t the first digital pen by a longshot. In case this one looks familiar, it’s basically a repackaged Neo smartpen N2, which enjoyed success on Kickstarter. It’s not even Moleskine’s first foray into the smart pen space either: the Livescribe 3 Moleskine Edition came out this past fall. And other iterations on the concept include the up-and-coming write-virtually-anywhere Phree, now funding on Indiegogo.

So it ain’t the first or last digital pen you’ll ever see, but it’s certainly one of the most stylish and functional. And you can preorder one now for $199, with shipping expected later this month. If you’d like to think it over, just jot down a note about it…somewhere.