These Incredible Colt .45 Handguns Made From a Meteorite Are The World’s Priciest Pistols

They’re truly out of this world. 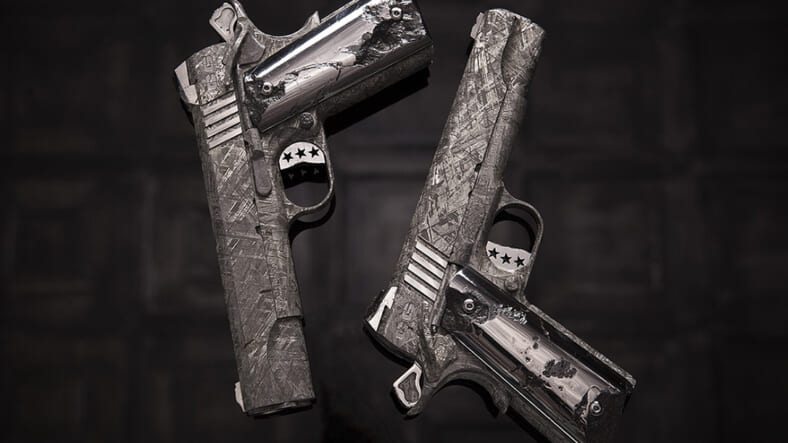 Pennsylvania’s Cabot Guns, which specializes in limited edition versions of the iconic .45 caliber Colt 1911 used by the U.S. Armed Forces from 1911-1986, has produced a custom pair of the pistols crafted from a meteorite that is several billion years old.

The incredibly unique firearms were made from a rare fragment of the Gibeon meteorite which fell to Earth and crashed into present-day Namibia about 4.5 billion years ago and was discovered in the 1830s.

Called the Big Bang Pistol Set, the precious pistols were created using X-rays, 3-D modeling, electron-beam welding, and EDM wire cutting. Cabot set the price at $4.5 million, which would make them the most expensive guns in history if someone actually ponied up the cash.

They were also acid-etched to bring forward the meteorite’s crystalline pattern with the “bark”, aka the outer surface of space rock, was left unfettered on the trigger.

The truly insane pricetag easily makes them the most expensive pistols ever, so if you’re looking to go down in the history books add them to your home defense arsenal.

They may be ridiculously expensive, but they’re undeniably out of this world.