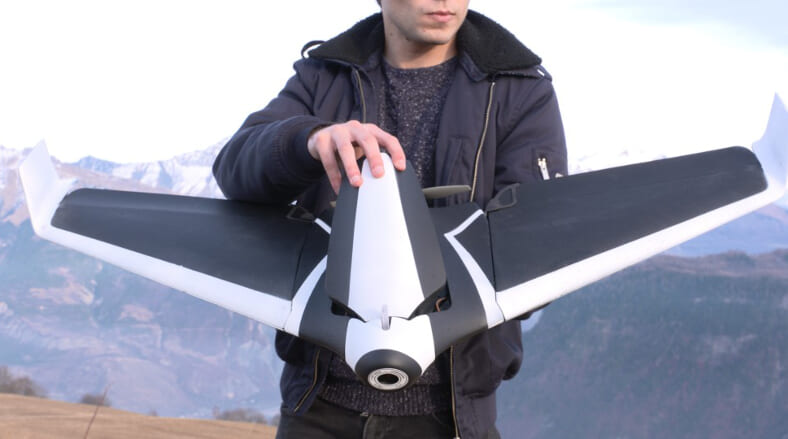 One of the very first things we saw at #CES2016 this year was a bit of a surprise. As we walked into Unveiled (a pre-show press event put on by the CTA), a fairly large plane at the Parrot booth caught our eye. Following their music-related nomenclature, they are calling Disco the first “ready-to-fly” fixed-wing drone.As much as the strikingly falcon-like form factor, we were impressed by how lightweight this flying prototype felt. That and its beefy 2,700mAh battery are what must contribute to its lofty 45-minute flight time (along with some strategic gliding, of course).They claim it takes almost no skill to pilot one of these plane drones. Once you’ve affixed the detachable wings to the body and turned the thing on, just fling it into the sky sort of like a Frisbee and watch it go. It’s got an autopilot mode and you can tell it to orbit around a point of interest.Similar to their fun and easy-to-fly Bebop quadricopter (to which they’r releasing a sequel), this can be commanded via Parrot’s optional Skycontroller module, which increases the drone’s range to over a mile. All the while, you can be recording and live streaming first-person HD video, either on your tablet or some fancy goggles.

When you’re done soaring around, just tell it to automatically return and land. Then just snap off the wings and you’re back on your way.Parrot hopes to release Disco into the wild later this year, and we’re definitely ready for it.