And it can hit speeds of nearly 40 MPH. 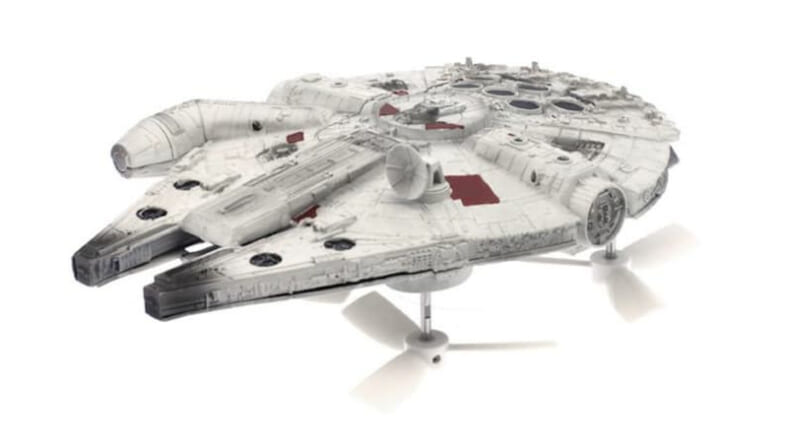 As you can see in the heart-racing promo video above, the folks at Propel have finally done it. They’ve created a series of four highly detailed, officially licensed and—here’s the key—quite flyable Star Wars drones.Whereas earlier entries in this space were a bit primitive yet fine for the time, these ships are the real deal.

Admittedly, we’re not exactly sure how far the Kessel Run is, but given that this Millennium Falcon drone can go from 0 to 30 in three seconds and tops out close to 40 MPH, we’re guessing it would give any intergalactic smugglers a run for their money.

What’s great is that these fan-worthy quad copters not only perform as well as they look (thanks to strategically placed and purposefully stealthy propellers), but their embossed boxes and handsome display cases make them collectible to boot.

Three speed settings make the drones accessible to pilots at all levels. They perform 360 aerial stunts at the push of a button. And—seriously, this is the best part—you can laser battle with up to two dozen of these crafty aircrafts swarming around at once.

So the only question left is: Which and how many do you want?Whether fancy yourself a Millennium Falcon flyer or want to try your hand at the T-65 X-Wing Starfighter, 74-Z Speeder Bike or Tie Advanced X1, you can only reserve up to four of each (by giving them your name and email).Naturally, they’ll also be available as a set of four (also limited to four per customer), which offers a 10% discount on the lot.

They’re expected to hit North American shelves in the fall/winter timeframe. But we’re not waiting to add this to our holiday wish list.