Razer launches a powerful laptop that can take your home office to the next level. 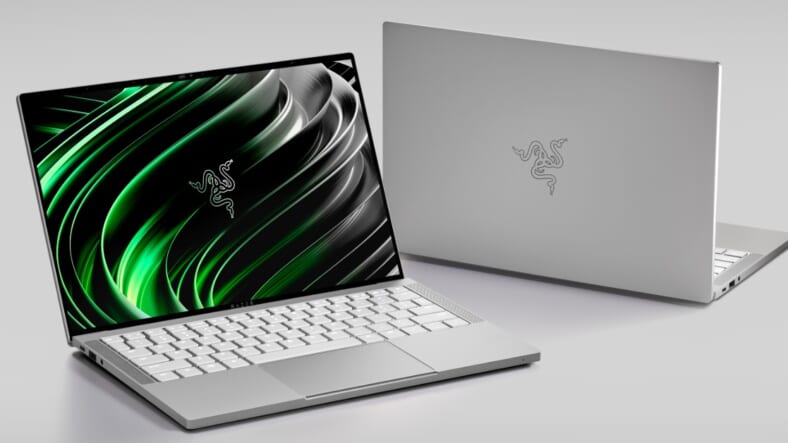 For years, Razer created some of the best gaming laptops on the market with their family of Blade computers. They packed powerful hardware into slim, well-built aluminum shells, and topped it all off with great keyboards.

Unfortunately, the model never took off in the productivity space, mostly because of its “gamer” aesthetic. The jet black body emblazoned with a bright green logo and flashing RGB lights dancing across the keyboard just didn’t sit well with a lot of professional users.

Now after nearly a decade of domination in the gaming space, Razer has officially entered the professional space with the newly launched Razer Book 13. On paper, it looks to be the best productivity laptop on the market.

Visually, the Razer Book 13 is all grown up and ready to handsomely adorn a home office or shared work space. Razer has swapped its trademark black and green styling for a much classier and Macbook-esque silver, with white keyboard. The backlighting on the keyboard is still RGB, but thankfully you can turn off the rainbow rave lights, or turn them all to white.

The screen measures 13.4-inches, and Razer claims it features the world’s slimmest bezels. The screen also uses the slightly taller 16:10 aspect ratio, with two resolutions available; Full HD or 4K. Both resolutions are available with touchscreen functionality, but Razer will offer a more affordable non-touch version of the Full HD screen.

Regardless of which screen you choose, Razer says it will come color calibrated from the factory and cover 100-percent of the SRGB color space. This makes the Razer Book 13 ideal for creatives, marketing execs, photographers, and anyone else who needs perfect color accuracy.

If you want to use that screen to enjoy some movies between meetings, the Razer Book 13 brings audio performance to match. The speakers flank the keyboard, and they feature THX Spatial Audio certification. It is also worth noting that Razer includes four built-in microphones and an HD webcam, so your company Zoom calls will look and sound better than ever.

When it comes to power, Razer really pushed its expertise in gaming laptop construction. By using an advanced vapor-chamber cooling system, Razer claims they can run their Intel CPUs faster, for longer, than competitors like the Dell XPS 13. All of this inside of a laptop that is just .6-inches thick, weighing less than three pounds.

Another area the Razer Book 13 beats the competition in the Ultrabook market is connectivity. On top of the two Thunderbolt 4/USB-C ports found on most laptops in this class, the Razer Book 13 adds HDMI out, a standard USB Type A port, a Micro-SD card reader, and a 3.5mm headphone jack with microphone support.

Pricing starts at $1,199 and goes up to $1,999 for the 4K model. Pre-orders are live now, and Razer says they should start shipping out this month.