That Freaky Robot Dog Is Coming to Stores Next Year, Ready to be Your Next Pet

YOU tell this thing to sit. 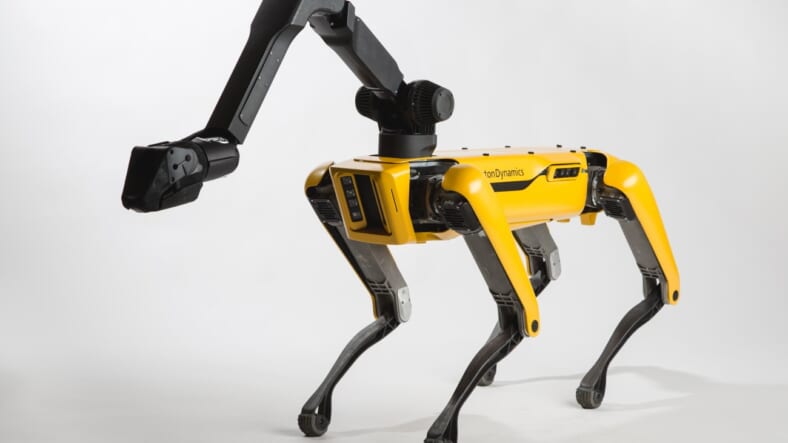 The freaky robotic dog that can open doors and fend off its masters with a crane-like anthropomorphic arm is coming to a store near you whether you like it or not.

One hundred of Boston Dynamics’ semi-autonomous SpotMinis will be produced this year before even more become available for public purchase next year, according a tech talk company founder Marc Raibert gave at UC Berkley.

“SpotMini is in preproduction now… We have a plan later this year to build a hundred with contract manufacturers, and that’s the prelude to getting them into a higher rate production, which we hope to start about the middle of next year.”

The mechanical pooch has a 90-minute battery life and is capable of handling objects and climbing stairs in offices, outdoor areas, and yes, even your home.

“The SpotMini robot, the small quadruped, is one that was motivated by thinking about something that could go in an office, with a more accessible place for business applications, or in a home eventually,” Raibert said of its possible applications.

At 66 pounds, it can also easily resist interference from any human who stands in its way.

Many have compared the SpotMini to the nightmarish “Metalhead” that ran amok in season 4 of Black Mirror when the first viral videos showcasing its capabilities surfaced earlier this year.

Let’s hope these things get along with their owners, otherwise we could be in for a robot dog plague of death and destruction.