The future is foldable. 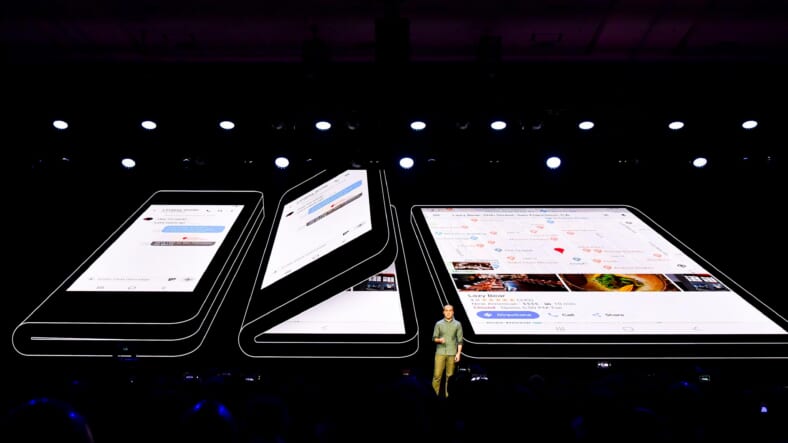 Samsung has been hinting at a fully folding phone for years but they finally decided to show off an actual working model of it yesterday at their Developers Conference in California. The unit Samsung demoed to the world was confirmed to be a prototype. The commercial version may very well take a different physical form but the core takeaway here is this: the future is foldable.

Easily the most major innovation in the smart phone space to happen in years, foldable touchscreen displays could bring about the same kind of industry-wide change that happened when Apple first pioneered multi-touch over a decade ago. Samsung has pushed their phones to have larger screens year after year but the limits of a device that people can keep in their pockets, lighter and thinner as they may be, looked to be at an endpoint.

Until now. Thanks to the Infinity Flex Display, as Samsung calls it, a huge 7.3” touchscreen with no seam can now fit into a form factor similar to that of an iPhone 6. The versatility of the Flex Display also means being able to choose between normal usage when folded or larger format usage when open. Samsung’s partnership with Google has brought about a commitment to update Android to leverage the larger screens that are incoming.

Multi-Active-Window, as it’s currently being called, will let users have multiple apps open simultaneously, potentially making for a more productive and the phone easier to use. That’s all well and good but let’s be honest here: a bigger screen really just means watching YouTube and browsing Instagram in a larger format…and that’s a welcome upgrade too.

Samsung said that they’re putting these new Infinity Flex Displays into mass production over the coming months. With both the Galaxy S9 and the Galaxy Note 9 already on the market, the landing ground for the first phone to use these displays will likely be the 2019 Note 10, since Samsung’s timeline doesn’t seem to jive with the typical Spring launch of the smaller Galaxy S line.