Game Play Is Wall-Sized With This Killer New Screen Projector 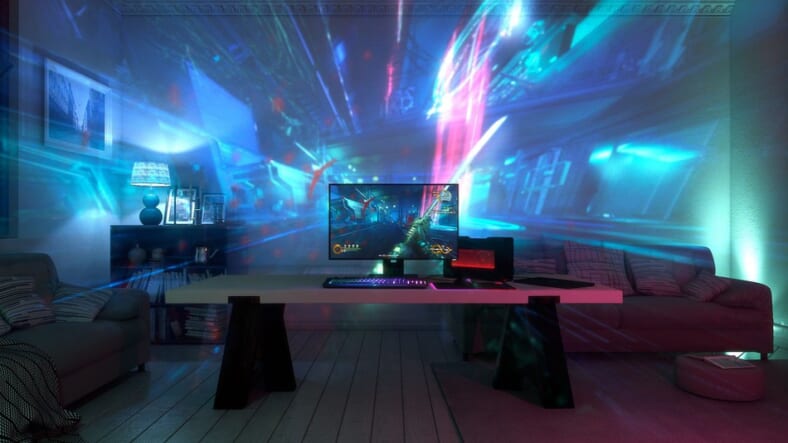 If you’ve ever been in the middle of some intense game play and wished you could climb inside and really immerse yourself in the experience, you need to cross your fingers that Razer gets its Project Ariana off the ground.

Mashable reports that the gaming hardware company says that Ariana is just a functioning concept device, but it damn sure looks ready to go.

At first glance Project Ariana looks like a plain old home projector not too much more advanced than whatever your granddad used to bore everyone with home movies back in the day. It’s a top of the line enhancement to playing any game, though. As Mashable notes:

Ariana has an ultra-wide 155-degree fisheye lens and two 3D depth-sensing cameras that can detect where your computer monitor (or TV) is and map projections around it on the nearby walls.When used for playing games, gamers could see a wider field of view projected outside of the monitor or useful gameplay elements like HUD features, instead of them blocking up valuable screen pixels.

Ariana runs off Chroma, a specialized “smart” lighting system Razer has been building into a number of products.

Razer indicated to Mashable that an ideal gaming situation for Project Ariana might be a first person shooter (think Overwatch, Deus Ex, or the rebooted Doom). The projector could be a huge aid in alerting players to weak health or depleted ammunition. It would be game immersion without the sometimes woozy, directionless feel some report in a total VR environment.

Again, it’s just a concept at the moment, but it looks like one that could take off and dominate gaming hardware. Keep an eye out, virtual reality may have some real competition on the market soon.