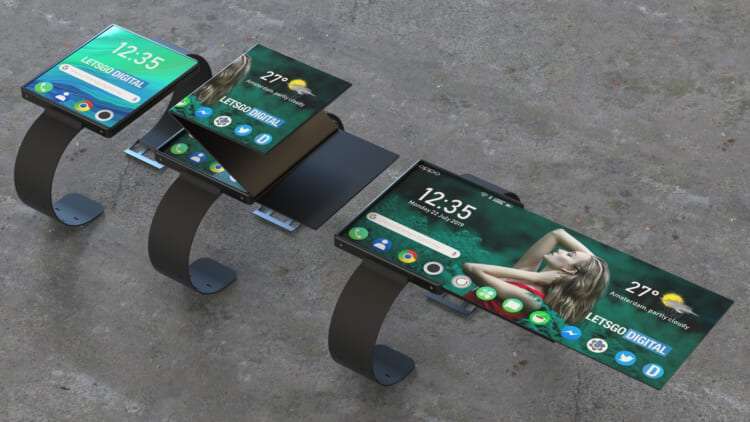 Smartwatches still look like watches; someone time-traveling from 1950 would recognize them as such. According to a design patent leak spotted by Dutch tech site Let’s Go Digital, China-based Guangdong OPPO Mobile (a.k.a. Oppo) has come up with a smartwatch design that might turn that form factor on its head.

If Oppo’s design is implemented—as illustrated by Let’s Go Digital’s render above—smartwatch owners may one day strap on a smartwatch that then almost magically unfolds into a smartphone-like display, expanding in size up to 200 percent from its folded form.

As presented in the patent documentation obtained by LetsGoDigital, the screen expands in width while the height stays the same. As you can see noted in the diagram below, the “unfolded display” would extend down the length of the arm you’re wearing the watch on, leaving you free to operate it with your other hand.When the watch is “folded” and back to its smallest state, the extra display is stored in the watch case under the main screen. There’s a recessed groove which the screen slides out from, and the design concept here envisions a pressure mechanism that lets you press to unfold the screen which also prevents the screen from accidentally unfolding itself.

BGR throws a little cold water on the prospect of seeing something this cool on the store shelves anytime soon, citing Samsung’s difficulties in simply making a phone with a folding screen.

Still, it is easy to believe that as soon as folding tech is perfected, designs like this might be the standard, rather than a concept buried in the U.S. Patent Office database.