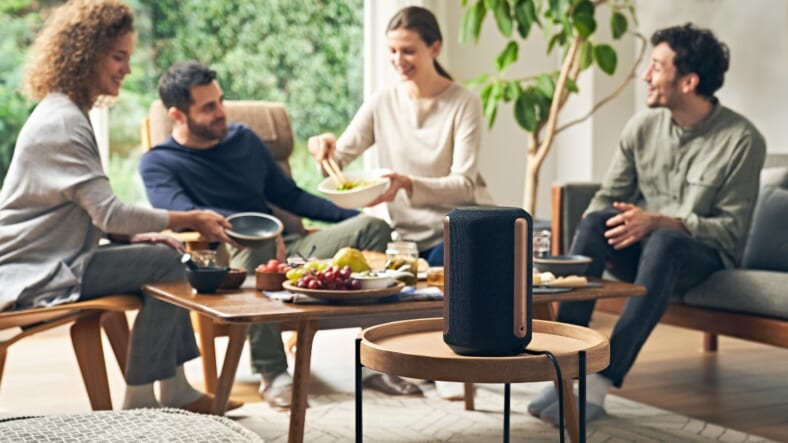 Birds are chirping, the dandelions are in bloom and your friends are whining about how much the vaccine shot hurt their precious arms. It is with perfect timing, then, that Sony has just unveiled the SRS-RA5000, an ultra-powerful wireless speaker built for a world where people are once again free to drink and dance and go home with strangers without hazarding anything more noxious than a hangover or a venereal disease.

Outfitted with a total of six 1.8-inch speakers arranged to deliver 360-degree audio, and a subwoofer to boot, the SRS-RA5000 combines the smart features and sleek design of a portable Bluetooth boombox with the razor-sharp sound quality and sonic range of a higher-end traditional stereo system.

And at just 10 pounds the SRS-RA5000 travels easily and is compact enough fit on a coffee table, or, if you’re old school, in the open trunk of a car. It’s like a block party in a can.

What’s more, thanks to Sony’s so-called “unique spatial sound technologies,” the SRS-RA5000 can be instantly calibrated with the tap of a finger so the audio is optimized for the surrounding environment, whether that’s your living room or a warehouse.

All of that being said, the good folks at Sony would like us to remind you that large gatherings are still a big no-no. In press material for the SRS-RA5000, the Japanese-based company, which has seen its profits soar in the age of business pajamas and Zoom happy hours, opines that “because of its immersive qualities, we think this speaker offers a great way to create a live music feel, all in the comfort (and safety) of home.”

Noble though their intentions may be, Sony’s press team seems to have forgotten that the speaker they’re promoting here could probably trigger an avalanche. Many consumers don’t live in homes big or remote enough to accommodate all that awesome power.

For example, when tested in an average-sized New York City apartment, the SRS-RA5000 could only be turned up to about half volume before this reviewer started to worry that the cops would show up the door. Still, that was loud enough to illuminate what makes the SRS-RA5000 worthy of its hefty $700 price tag.

Even at wall-rattling decibels, the sound remains crystal clear, its depth and nuance not merely preserved but accentuated as the volume increases. Cranked up all the way, the SRS-RA5000 may explode your eardrums, but at least you’d go deaf enjoying every bell, whistle and tambourine rattle of whatever song you decided was worth sacrificing your ability to hear for.

In that regard, the SRS-RA5000 is a significant upgrade from more affordable Bluetooth speakers, like the JBL Flip 5 or Sony’s own SRS-XB33. The difference is very noticeable.

So it is worth the investment? If you live in a sprawling abode or plan to throw some serious ragers this summer, and still have some of that stimulus money left to burn, sure. You won’t be disappointed. But if it’s the “live music” experience you’re after, well, you just might have to wait for the real deal.