Yes, Playing with BB-8 Is Just as Awesome as You’d Think

A hands-on review of our favorite new astromech droid toy. 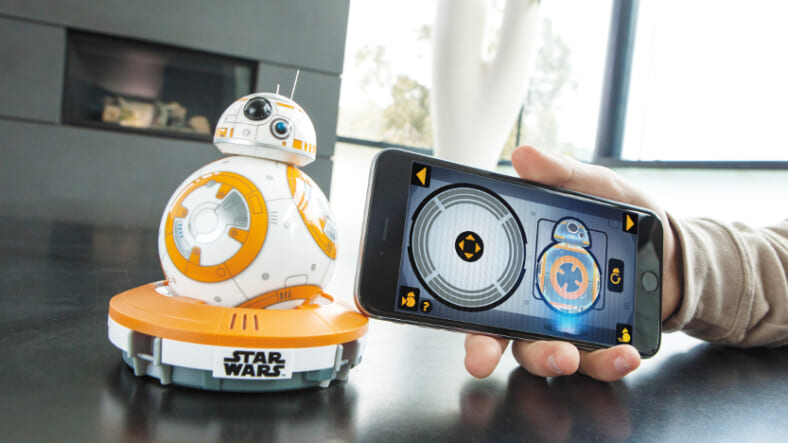 At long last, the big day is tomorrow. And as if I wasn’t already amped up enough in anticipation, I’ve been playing around with the addictively rad BB-8 Droid ($150). Using the video below as a model for what he—who has way too much personality to call an “it”—can do, I tested out some of his finer functions. Even after writing about BB-8 back in September and including him in our best gadgets of 2015 list, I wasn’t fully prepared for his real-life awesomeness.

The HologramsYep, even before I piloted him an inch, I was anxious to test out this space-age functionality. I was pleasantly surprised to find the app preloaded with a handful of holographic videos, from such friendly faces as R2D2 and C3PO. Then it came time to record my very own message. It took a little will power not to reiterate Princess Leia’s famous lines from the beginning of Episode IV, but I managed.After lining up my face with the on-screen template and capturing a short recording with my phone’s front-facing camera, I hit play on the screen. The message started playing just audio. But then when I pointed the screen at BB-8, a hologram appeared (a la augmented reality) to be coming out of him. It was very cool.The Voice CommandsSure, I could’ve just driven BB-8 around the room. But since the original Sphero (of which I’ve been a user/fan for several years) already did that, I wanted to try something different. I turned on the voice capabilities in Settings, prompted him with, “Okay, BB-8” and then gave a few of the commands listed on the screen.I asked him how he was feeling, to go to sleep and wake up, and sent him on patrol (more on that later). But my favorite was definitely yelling, “Look out!” Which prompted him to make a b-line right into a threshold, knocking his head off and prompting an appropriate crash/beheading noise. Maybe you had to be there, but it was very funny.Going on PatrolOne of the most entertaining aspects of this droid toy is that he entertains himself (and in the process, the family cat). Whether with a touch from the main screen or a voice command as mentioned above, sending him to explore is a fun way to see all the different movements he makes and hear all the various noises he emits. While he’s autonomously perusing the perimeter, there are all sorts of visually interesting stats whirring about on the screen, which I could tap through to view. Stuff like how far he’s gone, what’s up with his balance, his internal temperature and much more.That’s just a somewhat quick preview his coolest features. Given the great physical detail on the inductive charging base and BB-8 himself, along with the authentic Star Wars music and awesome faithful-to-the-genre graphics in the app, BB-8 more than met my high expectations. Until I make it to the theaters for Episode VII—and who am I kidding, probably both during and after—I’ll proudly play around with the quirky little guy. Well worth the hundred fifty bucks.