Take Down Rogue Drones From 500 Meters With The DroneGun MKIII

This compact, handheld drone destroyer is the enemy of flying robots everywhere. 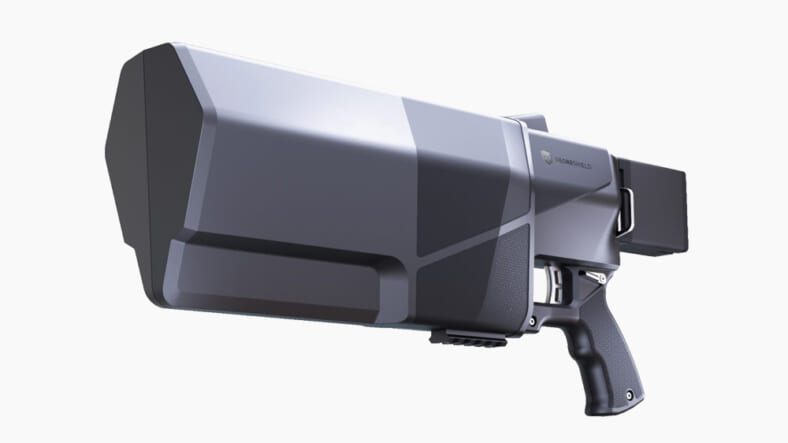 Commercially-available drones are tools, toys, and sometimes they’re just plain nuisances. In the wrong hands, they are also potentially dangerous to the public in general. DroneShield has a seriously effective (and awesome-looking) solution for that particular problem.

After years of tweaking, they’ve whittled their anti-drone tech down to a compact handheld shooter called the DroneGun MKIII. All an operator has to do is charge this bad boy up and go drone hunting.

The MKIII is powered by a lithium-ion battery that can fire up in a matter of seconds then operate steadily for up to an hour (and it will stay powered on standby for 8 hours). In that time, it can take out your targets by knocking out their video capability and completely disrupting their GPS systems.

It’s tough, too—weather and debris-resistant, and it can handle pretty much any temperature range. All that and it fits in a backpack.

Which only makes sense if you consider the notice on the DroneGun’s web page, which says that “DroneGun MkIII has not been authorized as required by the United States Federal Communications Commission (‘FCC’).” That is, this baby is designed for official use, and it needs to be that tough.

At the moment it can’t be sold or leased in the US unless it’s to a government agency. So if you acquire one as a private citizen, you could get in trouble.

And that’s a shame, because the idea of going quadcopter-hunting in your neighborhood to take down some of these little privacy invaders definitely does have a certain appeal.