With its titanium case the newest version of Apple’s wearable is the toughest and most useful yet. 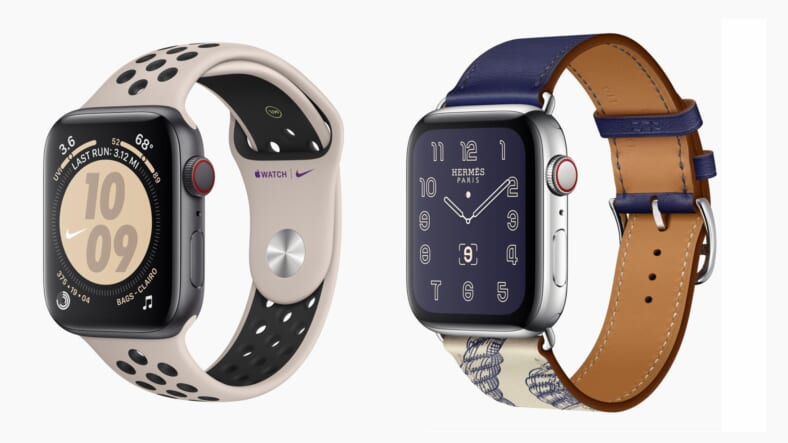 Apple just announced a slew of new iPhones but the Apple Watch Series 5 is getting a major update as well. The electronics giant is building on the excellence of their super-popular wearable by adding brand new perks and new customization options to entice even more customers to put Apple’s tech on their wrist.

First and foremost, the Apple Watch Series 5 has been upgraded to an always-on retina display. This addresses the most glaring issue with previous iterations (the perpetually-dark face) and gives the wearable even more of a practical edge on traditional timepieces.

There’s also a built-in compass and altimeter as well as the ability to show those complications on the watch face for those who rely on the watch and leave their phone behind. The Apple Watch Series 5 has improved GPS capabilities overall—a major plus for those who rely on the Apple Watch for a workout or travel. Or for anyone with no sense of direction.

These hardware upgrades have been better integrated with the introduction of WatchOS 6. This year, the Apple Watch will reach an entirely new level of customization through the combination of the updated OS and Apple Watch Studios. Located in Apple retail stores, customers can use Studios to mix and match finishes and straps, which include offerings from both Nike and Hermes.

The Apple Watch Series 5 with just GPS starts at $399. The cellular-enabled version is going for $499, and pre-orders are open now. The new watches will ship on September 20th. (Pre-Order here.)