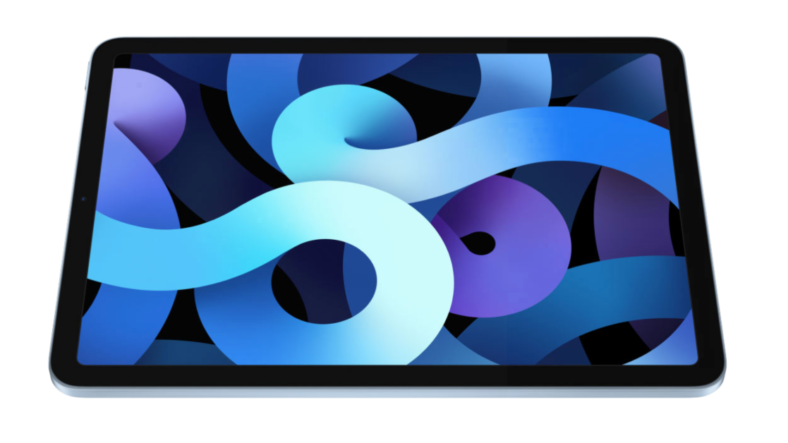 After the original iPad’s debut in 2010, the world went tablet crazy. All the capabilities of a smart phone but with larger screens and longer battery life, for many, tablets became the preferred way to play mobile games and consume media. Now, ten years later, the iPad Air 4 has arrived, and it’s the culmination of everything a tablet set out to be a decade ago.

First and foremost, the iPad Air is all screen. While it does share the squared, colored metal edge of the new iPhone 12 line, the conspicuously missing buttons allow for a bezel that is minimized significantly. The wall-to-wall 10.9” screen uses Apple’s liquid retina tech and it’s brighter and crisper than the cheaper base-model iPad in a big way.

The other fundamental change to the iPad Air models—besides the omission of a physical home button—is the upgrade to USB-C for charging and connecting other devices. USB-C has quickly become a standard among electronics and seeing the convenience of it begs an answer to why Apple finds it good enough for their laptops and iPads but, frustratingly, not the iPhone. As the iPad Pro made this upgrade to USB-C in its last iteration, it’s nice to see it make it to the iPad Air now too.

Battery life here also rivals that of the more expensive iPad Pro and, thanks to the new A14 Bionic chip, the new iPad Air packs more than enough punch for any task and will likely stay that way for the next few years. That’s another feather in the cap for the medium-priced Air 4 when compared to the more expensive Pro line.

The iPad Air 4, in typical Apple fashion, is made better when paired with other Apple products. In this instance Apple’s Magic Keyboard upgrades the Air 4 from an excellent tablet experience to a device that’s capable of subbing in for a laptop.

Likewise, the Apple Pencil 2 turns the iPad Air 4 into an essential tool in any creative arsenal. Like the iPad Pros, the Air 4 can also act as a second screen to any Apple computer or, oppositely, beam its own content to an AppleTV. Since Apple likes to make its devices play nicely together, all of these experiences require almost no setup and work seamlessly.

Coming in all the traditional colors as well as a new minty green and pale blue, the iPad Air 4 is a stylish and powerful option among all of Apple’s current tablet offerings. In every respect, it trumps the base model iPad and largely remains on level footing with the iPad Pro, even with a price tag that’s $200 cheaper.

If there was a question as to which iPad reigns supreme right now, the answer is clearly the iPad Air 4. Starting at $599 for the 64GB version, the iPad Air 4 is available now.