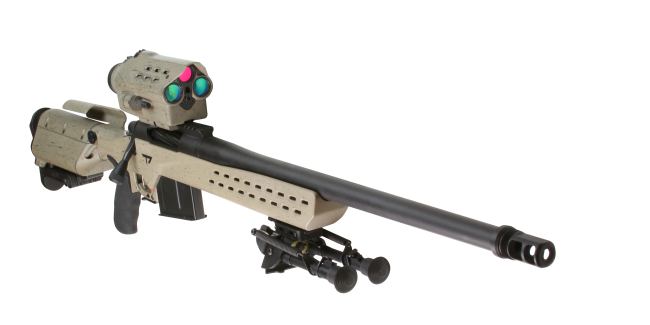 Until whitetails start wearing Kevlar vests, TrackingPoint’s precision-guided firearms—which use fighter jet technology to account for 22 shot variables—give shooters an unfair advantage. And their newest gun, the .338LM bolt-action M1400 EMR, is their most powerful and precise yet.But it’s impressive even beyond its capability to acquire and lock on targets up to 1,400 yards away moving at up to 20 miles an hour.

Its Wi-Fi capability allows you to connect their ShotGlass specs, for an HD view you can record and share. What’s more it offers a second view.

So you can take shots around corners, have a zoomed out view of the field even while the gun remains zoomed in on the target, and don’t have to even be holding the gun and putting yourself at risk to fire it.

In other words, it pretty much makes you the best shot in the world. Admittedly, for hunters it’s a bit of overkill. But nice to know our military will benefit in the fight against global terrorism.It’s available for pre-order now with a September delivery. They have a limited time offer running right now where they throw in the wearable specs and a case of ammunition (a $2,800 value).