Bring wood-fired flavor to the great outdoors with this mobile mini-grill. 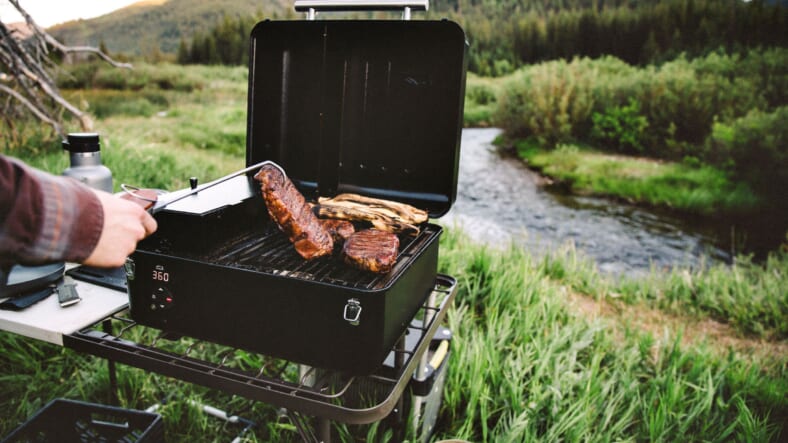 As the company that produced and popularized the first commercial pellet grills, it’s no surprise that Traeger has devised a way to load some of the best features from its full-size models like the range-topping Ironwood 885 into the compact Ranger.

First, let’s talk portability. Tipping the scales at a hefty 60 pounds and measuring 21 by 20 by 13 inches, the Ranger is considerably larger and heavier than a backpacking-worthy propane grill or a collapsing charcoal grill that can be chucked in the back of a pickup truck.

Rather, the Ranger excels in its ability to deliver precise, smoke-infused cooks better than virtually all other portable competitors. And if you can look past its weight, the Ranger is also relatively easy to transport thanks to two latches that secure its baffled lid and a sturdy metal handle.

Much like a standard convection oven (and the Ironwood 885), the Ranger boasts a digital arc control that be adjusted in five-degree increments up to 450 degrees, as well as a a built-in meat probe. These two features allow users to track the internal temp of poultry, beef, pork and fish to a T, instead of relying on grilling prowess and guess work. To put it bluntly, cooking on the Ranger is fool-proof.

And that bulky size definitely has its advantages. The Ranger’s 184 square-inch grilling area can accommodate six chicken breasts, six burgers or one full rack of ribs at a time —enough for a three-person feast. Once the meat is done, an included cast-iron skillet can be used to fry eggs, hash browns, or anything else that would fall through the grate.

It should be noted that the Ranger—along with all other wood pellet grills—require electricity. That’s no problem when a standard outlet or power pack is nearby, but you’ll need to connect a power inverter to a car battery and plug the Ranger in to run it off-the-grid at a campsite.

Once it’s hooked in, the Ranger’s eight-pound hopper will burn pellets for hours without needing a refill—my hopper hasn’t needed a top-off after cooking three separate meals for two. The Traeger Ranger is available now for $399.99.