It fires up to 600 rubber bands at whoever you’re beefing with in the office. 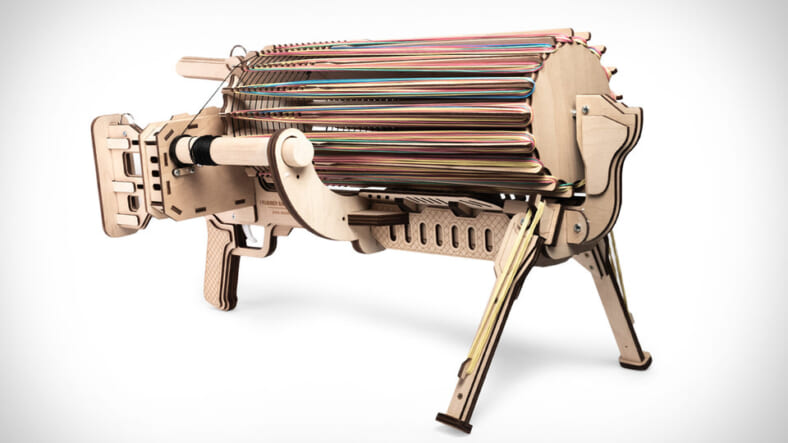 It’s time to prepare for warfare. Soon, the office Christmas party will come, followed by the inevitable recriminations the morning after. That’s right, the man unprepared to defend his cubicle to the last Post-It note will regret not having a totally ridiculous “weapon” like this Rubber Band Machine Gun on hand.

Automatic, made from wood, assembled by hand, the RBMG is a truly magnificent monster—at least as far as rubber band-loaded weapons go.

The RBMG is similar to the quaint yet deadly precursor to the machine gun, the Gatling gun. Mounted on wagons, a gunner could turn a crank on the Gatling and rake rows of incoming soldiers. It wasn’t a sniper’s weapon, but it did the job.

The same could be said of the RBMG if it’s loaded up. It is, after all, designed with sophistication usually reserved for far deadlier weapons, like the Super Soaker.

It has 17 barrels that an operator can rotate while firing thanks to an electric motor. The shooter can let up to 204 bands fly before they need to reload.

Uncrate says the box comes with a “stand, bi-pod, 12 targets, 600 rubber bands, a shoulder strap (why not?), and an instruction manual.”

Of course, the RBMG might be a little too intense for some. Anyone put off by its ballistic beauty should check out this tiny Marshmallow Crossbow instead.

While the decidedly less fierce crossbow is also more economical at $89, true warriors can purchase the Rubber Band Machine Gun for $200.

You know it’ll be totally worth it.