This is ‘BattleBots’ on steroids. 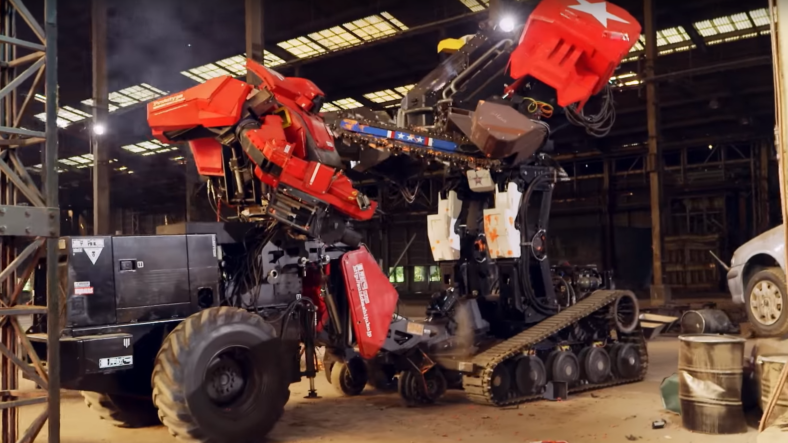 A sci-fi pipe dream has become a reality. We finally get to see what a real-life battle between multi-ton weaponized mechs really looks like in the world’s first giant robot duel.

“Two years ago, MegaBots challenged Suidobashi to a giant robot duel. Suidobashi accepted the challenge but on one condition: he wanted to fight hand-to-hand combat.”

“After years of research and development, Eagle Prime was designed specifically to go hand to hand against Kuratas. Suidobashi came back and said, ‘Wait—I still want to fight Iron Glory.'”

Goldberg then outlined the three ways to achieve victory: by a “robot knockout”—which amounts to knocking the opponent over—by disabling a robot, or by causing a pilot to surrender.

The first match begins at 8:32. Despite Iron Glory’s superior firepower, they were knocked over by Kuratas’ 600-pound fist in less than 30 seconds.

After Team USA’s swift first-round defeat, co-pilots Gui Cavalcanti and Matt Oerhrlein get behind the wheel of Eagle Prime. With a 6-ton advantage, the 430-horsepower monster proved to be a real headache for Kuratas.

At 13:28, the two titans begin their battle. Team USA initially engages with its double-barreled paint cannon before moving in at close range and using the gun as a battering ram.

After an entanglement renders both bots disabled, the round is stopped for a reset. This gives Eagle Prime the opportunity to switch out its cannon for a 40 HP chainsaw.

Kuratas pilot Kogoro Kurata was gracious in defeat, saying only that the match was “totally awesome” in the post-fight interview. Team USA pilot Gui Cavalcanti even called for a giant fighting robots sports league.

“I think it’s time to get some rules, some weight classes. Let’s bring this show on the road.”