Watch This Guy Shoot Every Kind of Gun Imaginable, Because It Looks Fun As Hell

Time to get FIRED UP. 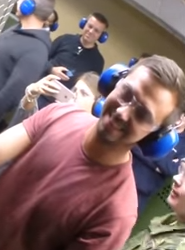 Let’s face it, shooting guns is a hell of a lotta fun. And shooting a veritable arsenal of high-powered firearms at the range is certifiably awesome, no doubt about it.

Just take a look at the unbelievably sweet video above of this guy busting caps at Battlefield Las Vegas range with tons of different guns. Dude pops off with everything from a Beretta pistol to an AK-47 to a goddamn Minigun, and it all looks fun as hell.

Our trigger-happy pals at military site Task and Purpose have nothing but respect for the intrepid shooter, whose video pretty much went viral on Reddit last week.

Couple of notes: Homeboy holds his own when the weapons are on full-auto. They don’t push him around, and that’s not easy. Also, check out that M-16 at 2:25. That thing is older than the post-Vietnam M-16 they issued me in boot camp.

He fires it in full-auto, which miraculously doesn’t result in a jam. Lastly, the coolest moment of the video comes at 2:44, when our friend is firing the M-1 Garand. The staff member is standing next to him, casually observing his firing, and when the clip ejects, he sticks a hand out and flawlessly catches it. Too smooth.

The video was shot at Battlefield Las Vegas, a large shooting range for tourists that describes itself on its website as “veteran owned and operated,” and allows visitors to fire a variety of weapons in various themed packages, including a “SEAL Team Six Experience,” which involves firing an MP5 submachine gun and an M-249 SAW light machine gun.

The whole shebang reportedly cost more than $1,000. But judging from the orgasmic look on the shooter’s face, it was money well spent.

Here’s some more videos from Battlefield Las Vegas to get fired up about: