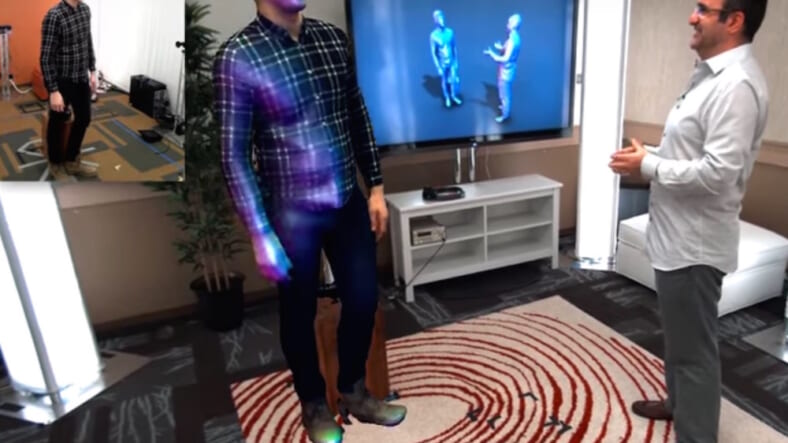 We’ve known about Microsoft’s HoloLens technology since they debuted it last June and then flaunted it at TED in February. But now, Microsoft just dropped a video demonstrating the full potential of “holoportation,” and it lives up to the hype.

For those unfamiliar with the Silicon Valley arcana, “holoportation” is a process that creates holograms from live video. In this demonstration, Microsoft Research’s Shahram Izadai shows that he can interact with people who are being filmed in real time elsewhere. Below, he walks us through the process with a colleague, Sergio, and then with his young daughter.

If anything, it’s just nice to see these tech types having some fun with their invention. “Hey Sergio! How does it feel to be holoported?” Izadi asks the apparition of his colleague. “It feels great to be holoported!” virtual Sergio answers.The rapport between these guys is incredible.

Izadi claims that this will revolutionize how people interact with each other across space. However, the video reveals a few limitations. For one, it was apparently conducted in a controlled environment. Izadi is only able to interact with people who are in rooms outfitted with special 3D cameras. Also, the cumbersome headset he wears is reported to cost $3,000.

HoloLens technology is still getting off the ground. We expect more interesting developments from Microsoft in the near future.