You won’t believe how many life-saving gadgets are in this thing. 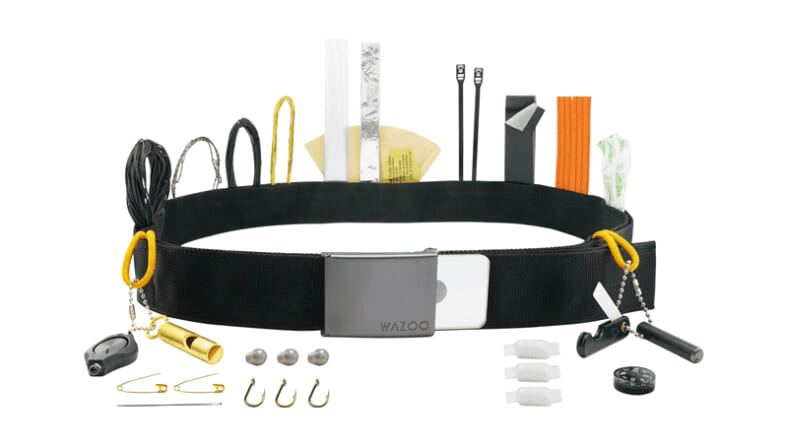 Let’s face it: most utility belts are basically just one step above fanny packs. They tend to be some kind of ugly and not really do the job well. You either have to nonchalantly dig into your pants (for the under-garment type) or take the belt off, in either case defeating its stealth purpose. And most aren’t made to go the distance.The folks at Wazoo recognize this and have come up with Cache Belt, the ultimate adventure and survival accessory. It comes in three versions, depending on how pre-packed you want it.

The Minimalist features nylon webbing; a hidden, top-loading 28-inch pocket with hook-and-loop enclosure; a bottle opener; gear loops; and a bead chain. That’s the one with the least stuff in it, so you can stow whatever EDC, first aid or techcessories you want on hand.The Essentials adds fishing gear; a needle and safety pins; water container and purification tabs; fire starting kit; brass whistle; and a few items for tying and taping stuff.The Adventure model goes even further, with a flashlight; ceramic knife; compass; signal mirror; and several other handy items.

As if all that functionality weren’t enough, it’s pretty versatile just as a belt—which, by the way, does a fine job holding up your pants. The black band and metal buckle go with pretty much anything, from shorts to fatigues and travel to business attire. So it’s both super helpful and not embarrassing to wear all the time.

With more than a month to go, its Kickstarter campaign is already over 10X funded. But you can still score some good deals. The Minimalist is currently going for $25 ($5 off expected retail), Essentials for $50 (a $25 discount) and Adventure for $95 (a $20 discount), with delivery of all planned for January.Wanna give it as a gift? They’re planning a custom Holiday edition of their burnable business card. So you can let the recipient know they have a cool belt on the way…and in the meantime, a great way to start a fire.