We Rode the Indian Scout, a Handsome Cruiser that Demands Respect

It’s a lot like Ronda Rousey: sexy, but will stomp the crap out of you if you don’t treat it right. 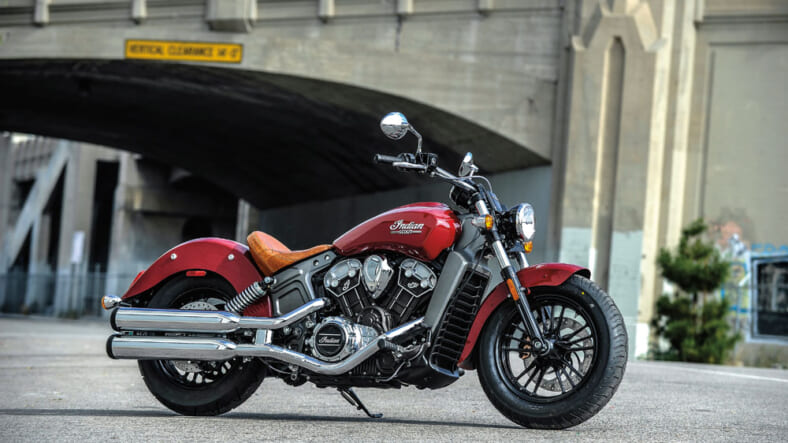 We couldn’t climb on the 2015 Indian Scout without thinking of Charlie Ransom, a gritty man with a long, wispy beard we met earlier this year at the Handbuilt Motorcycle Show in Austin, Texas. He rides a 1920s Indian Scout on the Wall of Death, a carnival sideshow where motorcycles ride around inside a huge, circular motordrome made out of worn-out wooden planks. Ransom steers his century-old bike around this thing, first with no hands, then sitting sidesaddle, and then finally sitting sidesaddle with no hands.
You wouldn’t be wrong to think this new Scout is like the old Scout, a calloused brawler that wears bumps and dents proudly. But you would be wrong; the all-new, $11,000 Scout is a cruiser, through and through. It’s not a bike you walk away from bloodied. It’s soft, friendly, and approachable. Its super-low seat that’s wrapped in thick, soft saddle-brown leather is effortless to step over, and a relatively light 560-lb wet weight means the motorcycle is easy to stand up. A clutch lever with a lot of give means the Scout is damn near impossible to stall, and a throttle with a lot of play means you can meter out power slowly and smoothly. Bolted to the bike’s aluminum frame are beautifully shaped body pieces, like the edgy-yet-elegant lion tooth fuel tank, and coming off the front and rear ends are huge, flowering fenders that look like they’re slowly melting over the Scout’s big, cushy tires.
Not to completely chop off the Scout’s cojones, though. It’s a lot like Ronda Rousey: sexy but will stomp the shit out of you if not respected. The Scout’s meaty V-twin engine sends 100 hp and 72 lb-ft of torque through a surefire 6-speed transmission. The Scout starts off at a leisurely pace, but roll on the throttle and a wave of torque hits you in the chest. The deeper you go, the harder it tries to push you off the back of the bike. The cruisers floats through corners relatively confidently and is most fun out on the highway, where you can enjoy its compliant suspension as you do full-throttle blasts alongside 18-wheelers, just so you hear a bit more of the gritty exhaust.
It takes very little skill to ride the 2015 Indian Scout. So little skill, in fact, that we constantly and unconsciously took our hands off the handlebar to crack our knuckles and rolled a few city blocks before grabbing back on to the grips. No great stunt, mind you, but it shows how balanced and mild-mannered this curvaceous cruiser is. Would we ride it the Wall of Death? Hell no, but maybe Charlie Ransom would.