Xbox Series X vs. Playstation 5: Who Ya Got?

Microsoft’s Series X and Sony’s PS5 are dropping just in time for the holidays. Which powerful new gaming console will reign supreme? 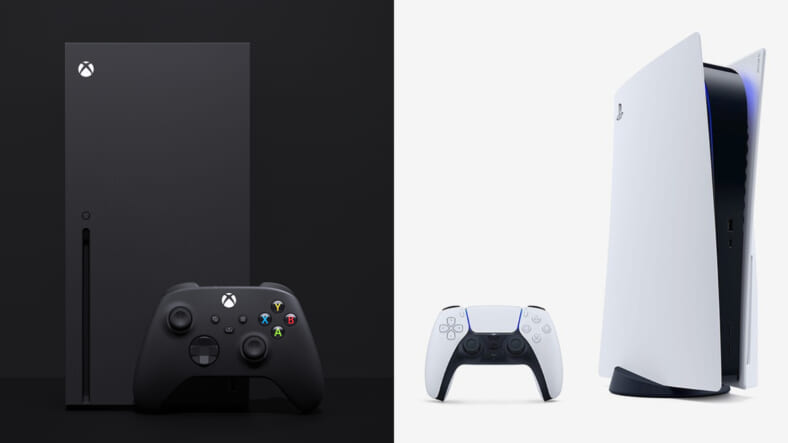 For video game fans looking for a fast-loading new console, it’s truly the most wonderful time of the year. That’s because Sony recently unveiled the long-awaited Playstation 5—just days after Microsoft launched the equally buzzed-about Xbox One Series X and S. It’s a veritable clash of the console titans, and both figure to rack up huge sales numbers heading into the holidays.

First, let’s look at Xbox. The Series X ($499.99) includes a Blu-ray disc drive, which the Series S ($299.99) does not, which means games must be downloaded digitally. The Series X features a more powerful processor and “true 4K” resolution, plus more storage (1 TB) vs. Series S (512 GB). Gamers can play nearly all games from the Xbox One and Xbox 360 and some titles from the original Xbox, plus third-party blockbusters like Madden NFL and Call of Duty.

Then there’s Sony’s PS5. It’s also $499.99 for the standard PS5 with a Blu-ray disc drive, and $399.99 for the digital edition that requires users to download games digitally. The futuristic console itself is somewhat massive, but it comes with the best PlayStation controller Maxim ever tested and lightning-quick load times. The PS5 is accompanied by the game Astro’s Playroom, and can play PS4 fixtures like Fortnite, Call of Duty and Madden NFL. There’s also PS5-specific games including Marvel’s Spider-Man: Miles Morales and a Demon’s Souls reboot.

So which powerful new gaming console will reign supreme? Go to versusgame.com on your phone to predict the winner of this challenge and other fun face-offs!