Today is the fifth anniversary of the natural disaster. 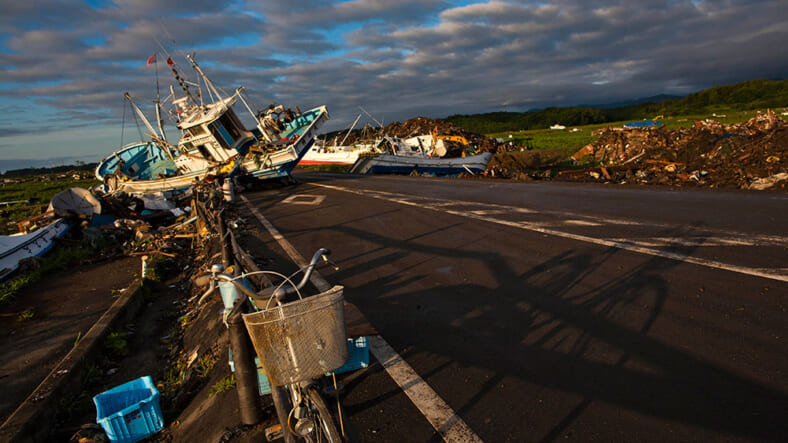 On March 11, 2011 an immensely powerful 9.0 earthquake rattled the ocean floor off the northern coast of Japan. The quake was bad enough, but what followed was the stuff of disaster films: an earth-scouring killer tsunami that devastated a nuclear plant (causing the worst nuclear disaster since Chernobyl), leveled neighborhoods, and killed almost 20,000 people.

Japan marked the fifth anniversary of the disaster Friday, reported Reuters, with flags at half-mast and a moment of silence held at the exact time the quake first struck, 2:46 PM local time.

Even more than the deadlier 2004 southeast Asian tsunami that killed hundreds of thousands in several nations, the 2011 disaster was a nearly real-time experience for the global audience who sat glued to live news coverage. It was recorded by TV cameras and by hundreds of average citizens who were going about their day, only to realize something truly horrifying was unfolding around them. The biggest challenge isn’t finding videos that illustrate the terrifying impact of the 2011 tsunami — it’s choosing only handful.

Ministry of Land, Infrastructure, Transport and Tourism closed-circuit TV cameras captured the onslaught of the tsunami in the Iwate Prefecture. The video was displayed at a higher speed because the original footage was made with a low frame-rate.

This video is over 22 minutes long and shows the tsunami absolutely crushing the town of Minamisanriku in the Miyagi Prefecture. Its cumulative effect can be unsettling.

Aerial footage of the quake perhaps removes the immediacy found in footage from survivors, but it thoroughly illustrates the tsunami’s immense speed and power.

It’s just under 2 minutes and 30 seconds long, but this hi-def footage of the tsunami overwhelming the Port of Sendai is chilling, illustrating how it moved quickly from distant spectacle to imminent threat.

This footage didn’t become public until months after the event. As much as almost any footage you’ll find, it puts the viewer in a survivor’s shoes.

In addition to the thousands of dead, over 160,000 Japanese lost their homes in the disaster. Many still live in alternative housing today. The area around the devastated Fukushima nuclear plant remains uninhabitable

There are some who claim they’ve encountered staring ghosts late at night in tsunami-impacted zones. These are probably just modern campfire stories told to process the trauma and stress. But after watching videos of how the disaster unfolded, you can understand how survivors might struggle to live in a land so wracked by death and destruction