This Magnificent 1,109-Carat Diamond Is Going Up For Auction

This thing is the size of a tennis ball. 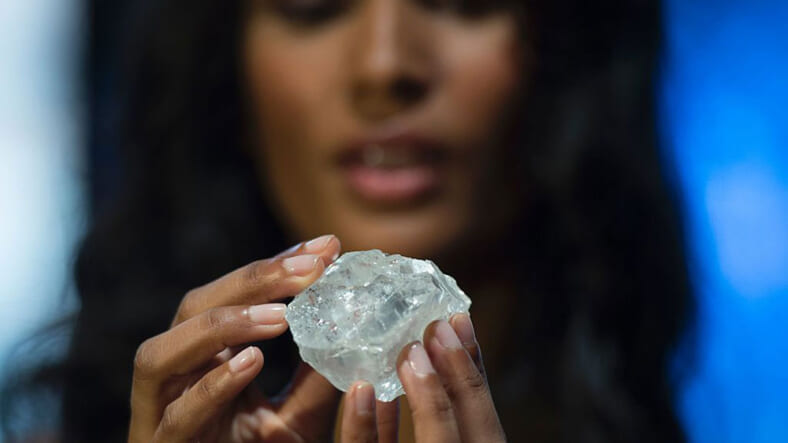 It hasn’t been cut, and to the untrained eye it might look like a raw block of glass — but it’s actually a 3-billion-year-old treasure potentially worth as much as $70 million at auction. It’s the 1,109-carat Lesedi La Rona diamond, and Bloomberg recently reported that it is “the biggest diamond unearthed in over a century.”

The Lesedi was reportedly unearthed by the Lucara Diamond Corp. in 2015 and its name means “our light” in that country’s native tongue. Speaking to Bloomberg, Lucara CEO William Lamb said the glittery beast of a jewel had “blue-sky potential” for his company — and for whoever purchases it as well. “You only need two people that desperately want it,” Lamb said, “and then you’ll get a good price.”

Sotheby’s has set the auction price for the Lesedi, and it based the $70 million on what the diamond could yield when cut — perhaps a solid 400 carats. And, as CEO Lamb told Bloomberg, no one really “knows what a 400-carat diamond is worth.”

Whatever the value of this remarkable gem, Bloomberg stated Lucara Diamond will reap nearly 50 percent of the profits.

Sotheby’s calls the Lesedi La Rona “The Diamond of a Lifetime.” When the jewel goes up for auction on June 29, 2016, several lives will certainly end up richer by profiting from it.