From a $1 billion floating city to a superyacht with an on-board missile defense system. 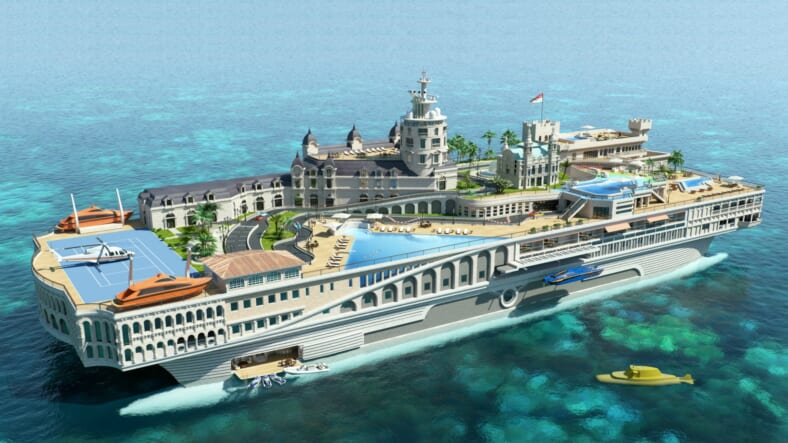 The Gazette Review recently made a survey of the largest yachts in the world and their billionaire owners (no surprise there) – which was almost correct. Here, we’ve updated the top 5 eye-poppers so Maxim readers know who’s really on top:

This yacht doesn’t actually exist – yet. Set to be completed next year at a cost of $1 billion, it’s literally a 500-plus-ft. long floating island that replicates some of Monaco’s most iconic buildings and boulevards, including the Monte Carlo Casino, the Monte Carlo Grand Prix track and the Hotel de Paris.

The first “gigayacht”, built for Russian oligarch Roman Abramovich, it’s an astounding 536 ft. long and has two helipads, two swimming pools, two Jazuzzis, a nightclub, a mini submarine and anti-paparazzi shield, as well as 70 crew members to look after its guests.

At 591-feet long, the Azzam, built by Lürssen Yachts for Sheikh Khalifa bin Zayed Al Nahyan, Emir of Abu Dhabi and President of the United Arab Emirates, is the largest yacht in the world. Complete with a missile defense system it can hit 32 knots thanks to engines kicking out a combined 94,000 hp.

Sheikh Mohammed bin Rashid Al Maktoum, Emir of Dubai and Prime Minister of the United Arab Emirates, owns this 531-ft. behemoth, which can accommodate 115 guests. He bought it as an unfinished project from the infamous Prince Jefri of Brunei.

This yacht, owned by Andrei Melchenko, is “only” 390 ft (119 m) long. But, what sets the price so high it’s the uniqueness of this yacht. It has two unique, 11 meters long tenders, two swimming pools and an interior that is said to resemble a Bond villain base. Who’s up for a test drive?