All the greatest stogie-smoking tips from the experts at Nat Sherman. 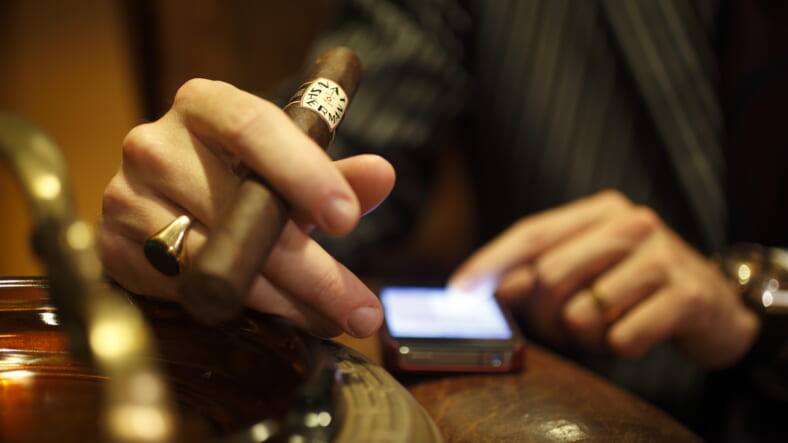 Michael Herklots (above) is not only Vice President of Retail and Brand Development at Nat Sherman, the legendary New York tobacconists, he’s also one of the best-dressed men in town and an all-round connoisseur of the gentlemanly arts. Who better to advise Maxim readers on the proper way to enjoy a stogie?

1. Select an appropriate sized cigar for the amount of time you have to enjoy it.

“Premium sigars are meant to be enjoyed start to finish, in one sitting. It’s one of the reasons a line of cigars offers several different formats (vitolas). If you only have a short amount of time to commit to enjoying a cigar, look for a petit corona or a short robusto. If you have 30-45 minutes, opt for a Robusto, Toro or Corona Gorda. And if you have an hour or more, a classic Churchill or beautiful torpedo might just be the thing.”

Also note: “Please do not take a big cigar and cut it in half to make two smaller ones. This would be the same as taking a novel and tearing it in two. The novel – just like the cigar – must be completed in order and in its entirety.”

2. The longer the cigar, the cooler the smoke and the more potential for flavor development from start to finish.

“The shorter a cigar is, the quicker it may become hot and the flavor won’t develop as much. Premium cigars utilize long-filler tobaccos, which are essentially whole leaves that run the entire length of a cigar. As the cigar burns, you’re turning a solid (the leaf) into a liquid and gas as you draw the smoke through the filler and onto your palate.”

“There are residual oils that also move through the fillers as you smoke that are retained within the filler, allowing the cigar to become richer and bolder as you smoke.”

3. The thicker the cigar, the more filler tobaccos used in the blend.

“The thinner a cigar is, the less filler tobaccos are required. However, no matter the size, all premium cigars use a binder leaf and a wrapper leaf. This means that the influence of the wrapper’s characteristics is more dominant in a thinner cigar than a fatter cigar, since in a thicker format there are significantly more filler tobaccos burning.”

4. Contrary to popular belief, darker cigars are not always stronger.

“While common sense would suggest a darker cigar is stronger and a lighter cigar is mellower, that is not always the case. In fact, often times the darkest cigars are not strong at all, as they use a Maduro wrapper, which references a more intense fermentation process that generally results in a slightly “sweeter” or bitter sweet influence.”

“On the other hand, lighter color wrappers can cover a blend that contains stronger filler tobaccos. That said, there is a greater likelihood that a lighter cigar is mild, than to assume a darker cigar is strong. Thus, if you prefer a mild cigar, it is a safer bet to select a lighter wrapped cigar and if you prefer a stronger cigar, look for something darker in shade but avoid the darkest, Maduro wrapped cigars.”

5. Do not inhale premium cigars.

“The flavor of a premium cigar is meant to be enjoyed on the palate. I will always equate smoking a cigar with drinking through a straw. Presumably, we’ve all used a straw at one point in our lives and have all lived to tell the tale, which means we did not inhale our beverage through the straw.”

“We simply created suction in our mouths, pulled the drink into our mouths and held the beverage in our mouths for a long period of time while breathing through our nose. The technique is identical when smoking a premium cigar, except we expel what’s in our mouth rather than swallowing.”

6. The best way to cut a fine cigar is the “straight cut.”

“Premium cigars have an open end (the foot) and a closed end (the head and cap). And the cigar’s wrapper is applied, in the final step of manufacturing, from the foot to the cap. However, the cap must be removed in order to smoke the cigar, as the smoke needs to travel through the cigar and onto the palate. There are many different methods to cutting a cigar, but the most common and most recommended is a ‘straight cut,’ using a guillotine style cutter.”

“If you examine a premium cigar, holding it foot (open) side down, you’ll notice there are several horizontal lines in the wrapper running around the circumference of the cigar’s head. Those lines are where the wrapper leaf has been overlapped, securing it in place on the cigar to hold it together. When cutting the cigar, you want to only remove the cap without removing those overlapping layers. If you cut too much off, you’ll remove the overlapping layers of wrapper and the wrapper will simply unravel.”

Bonus tip: “Take a double guillotine cutter, open the blades and place it flat on a table. Hold the cigar foot (open end) up, and place the cigar cap down into the cutter’s hole, resting the cap on the table. Holding the cigar in one hand with the cap firm against the table, use your other hand to bring the blades together clipping just a small, straight slice off the cigar.”

“There is no rule for how far to smoke a cigar. The rule is that you smoke a cigar as long as you’re enjoying it. Once you feel you’re done, simply rest the cigar in the ashtray and allow it to extinguish on its own.”

“Since it is all long-filler and all natural tobacco, there is no accelerant or additive to encourage it to combust –it will simply go out. From a philosophical standpoint, this maintains a level of respect for this beautifully hand-crafted product, rather than stubbing and smashing the cigar and grinding the end in an effort to put out every ember.”